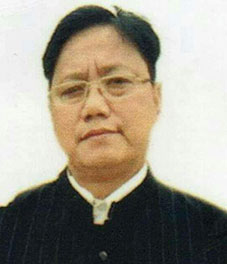 ITANAGAR, 23 May: Former minister Dibang Tatak succumbed to Covid-19 on Sunday at around 11:30 am at the dedicated Covid hospital (DCH) in Chimpu.

Two-time MLA Tatak had been admitted to the DCH after testing Covid-19 positive on 14 May.

Tatak was born to late Digong Tatak (head PI) and Neyang Tatak on 20 June, 1962. He started his political career in 1992 as a GPM and an ASM from Rumgong. He was elected as the ZPM of Rumgong anchal samiti, and then he was elected as the district vice president of West Siang zilla parishad.

In 1995, he became an MLA from the INC party under the Gegong Apang government. He was reelected for a second term in 2004. During his tenure, he served the state in various capacities as chairman and minister. He is survived by his wife Oyi Borang Tatak, three daughters and a son.

The state government has declared a day’s mourning on Monday as a mark of respect to the departed soul. The national flag will be hosted at half-mast throughout the state.

In a condolence letter to Tatak’s wife, Khandu said, “With profound sorrow, I write to share the grief of losing one of the pioneering political figures of Arunachal Pradesh, late Dibang Tatak, who breathed his last today. Not only as a former member of legislative assembly but also as a humble, honest and a compassionate human, Shri Dibang Tatak ji has left behind a legacy to cherish.

“I pray to the almighty to bestow you with strength to bear the loss and may the soul of the departed rest in eternal peace,” the chief minister said.

Governor BD Mishra also expressed grief over the sudden demise of Tatak, and offered condolences to the bereaved family.

Mishra said Tatak was a grassroots leader and made remarkable contributions to the state in various capacities during his long political career.

The governor prayed to the almighty to give Tatak’s family courage and strength to withstand the tragic moment.

Legislative Assembly Speaker PD Sona has also expressed deep shock and grief over the demise of the former minister and legislator from Rumgong constituency.

“Late Dibang Tatak was an experienced and committed leader who made lots of important contributions towards the development of the State. His sudden and untimely demise is a great loss to the state,” the speaker said.

Sona conveyed heartfelt condolences to the bereaved family and prayed to the almighty for eternal peace of the departed soul.

Former chief minister and Sagalee MLA Nabam Tuki in a condolence message said, “Late Dibang Tatak was a vibrant leader with a devoted sense of service to the state and its people. His utmost contribution for the people and all-round development of Arunachal Pradesh will be always remembered. In his untimely demise, the state has lost a great leader.”

He extended his deepest sympathies and condolences to the bereaved family and loved ones, and prayed to the almighty to give them comfort and strength to bear the irreparable loss.

In his condolence message, Moyong said: “I fall short of words to express my grief on the sad demise of our beloved Tatak Sahab.”

The MLA conveyed heartfelt condolences to the bereaved family and prayed that they have the courage to cope with the tragedy.