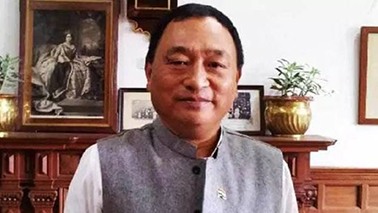 ITANAGAR, 24 May: Multiple FIRs have been filed against YouTuber Paras Singh of Punjab for his racial statements against Pasighat West MLA Ninong Ering and for identifying Arunachal as a part of China in a video uploaded on his channel, ‘Paras Official’, on 23 May.

However, the video was edited and taken down on Monday afternoon after several people reported the video for its racist content.

In the video, Singh is heard speaking about the PUBG ban in India and Ering’s appeal to Prime Minister Narendra Modi to not allow the launch of a similar game with the name ‘Battlegrounds Mobile India’.

The YouTuber goes on to show a photo of the MLA and asks his viewers whether the MLA looks Indian, followed by “I don’t think he is from India.”

Singh goes on to surf through Ering’s Twitter page and opens his banner photo, wherein Ering is seen standing with a group of Adi men in their traditional clothing, worn usually during a Tapu dance performance.

Singh is heard saying, “None of them look Indian. Maybe people from Arunachal Pradesh look like this. I don’t know. I have never met them.”

He then goes on to say that Ering’s name does not sound Indian. “I cannot read it and don’t even want to try reading it,” he says.

Ering, who is also a former member of parliament and former union minister of minority affairs, issued a statement on Monday, saying that he had requested the prime minister to stop the launch of Battlegrounds Mobile India as “children in Arunachal and the Northeast are simple and innocent and are unaware of the effects of such games.”

“Such games divert children’s attention and they get addicted to it. They don’t sleep or study well,” he said.

Regarding the racial remarks made by Singh, Ering said, “I don’t mind a comment on an individual level, but his statement on Arunachal sends a very wrong message to the society.

Our children not only study in other states of India but also abroad and we are all proud of being Indians. He said that we look like Chinese, and that we don’t look Indian. However, we have boxing champions like Mary Kom and our union Youth Affairs and Sports Minister is Kiren Rijiju. Don’t they study history or geography?” the MLA said.

“The video has sent out a very wrong message to the society and has hurt all of Arunachal. I am extremely saddened by it and I am filing an FIR. He is a young boy and he probably does not understand, but we need everyone to understand that the sentiments of Arunachalee people and the Northeast have been hurt by such similar statements time and again. This is condemnable,” Ering said.

Special Investigation Team SP Rohit Rajbeer Singh informed that a case has been registered against Singh under Sections 124 A/153 A/505 (2) IPC.

While he did not disclose the contents of the FIR, this daily received a copy from a source, wherein Ering has sought firm action against the YouTuber and videos that “create rift in society.”

He also sought action under relevant sections of the SC/ST (Prevention of Atrocities) Act, the Information Technology Act, and the Indian Penal Code.

One of the first political leaders to make a statement on the issue, Deputy Chief Minister Chowna Mein said, “I am appalled and greatly dismayed to see a recent YouTube post by one Mr Paras Singh (Bunty) where he has not only questioned the nationality of an MLA from my state of Arunachal Pradesh but also questioned the existence of our state within India.”

“To doubt our nationality because of how we look is a problem most of us from the Northeast of India face regularly in the mainland. What we look like, how we dress, what we eat and how we live makes us no less Indian,” he said.

Strongly condemning the “racist and arrogant act” of Singh, Mein sought an unconditional apology to the people of Arunachal, and asked every right-thinking Indian to condemn such prejudiced views.

Chief Minister Pema Khandu also updated on the status of the case, and wrote: “Based on the video that aims at inciting ill will and hatred towards the people of Arunachal Pradesh, the Arunachal Pradesh Police has already initiated action. A case has been registered against Mr Paras u/s 124 A/153 A/505 (2) IPC.”

He informed that the social media account of the person is being thoroughly investigated for details about his activities, and that technical resources are being employed to learn about his current whereabouts.

“Use of social media should be with due caution and any infringement will lead to action as per law,” Khandu said.

Later in the afternoon, Singh also uploaded a video of himself apologizing. Another video was uploaded a few hours later, in which his mother is seen apologizing for her son’s video and claiming that her son has been “picked up by some people claiming to be the police.”

However, her claims could not be authenticated and people have questioned how she was able to access her son’s account to upload a video if he was taken away.