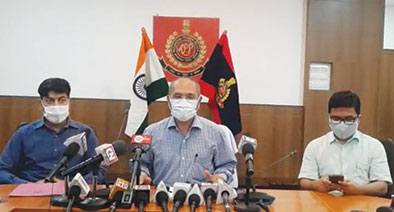 ITANAGAR, 25 May: The Punjab Police on Tuesday arrested YouTuber Paras Singh after a case was registered against him for making a racial comment against Arunachal MLA Ninong Ering.

“After registering the case against him, based on an FIR lodged by the honorable MLA, we contacted Ludhiana Commissioner of Police Rakesh Agarwal. There was constant effort from Ludhiana police,” said Apa.

The IGP informed that a three-member special investigation team (SIT), led by Inspector Techi Vijay, is on the way to Ludhiana to seek five days’ transit remand to bring Singh to Arunachal.

“After having custody, we would produce him in the court. We would pursue for transit remand. Our effort is to bring him to Arunachal Pradesh. Let’s see what the court says,” said Apa. He added that the state police would not tolerate objectionable comments in support of Paras Singh on social media.

Paras Singh, who goes by the name ‘Paras Official’ on his YouTube channel, had in a video posted on Sunday termed Congress MLA Ninong Ering a non-Indian and claimed that Arunachal was “a part of China,” sparking furore among Arunachalees as well as people from other parts of the country. In yet another video, posted on Monday, Singh had apologized for his comments.

The YouTuber had made the remarks while reacting to a letter addressed to Prime Minister Narendra Modi by Ering recently, wherein the latter had asked the PM to ban the relaunch of PUBG Mobile India’s new avatar, Battlegrounds Mobile India. As many as 10 FIRs were lodged in various police stations of Arunachal against Singh, but taking suo moto cognizance of the case, the police registered a single case under three sections: 124 A, 153 A and 505 (2) IPC.

The Arunachal government on Monday filed a case against the social media influencer for his racial remarks against the Congress MLA, and “ill-will towards the people of the state.”

Ering, a former union minister, had said in the letter that “re-launching the game is a mere illusion and a trick to collect user data of the citizens, including children, and transfer it to foreign companies and the Chinese government.”

Noting that it poses a big threat to the security of the country, Ering had requested the prime minister to stop the relaunch. (With PTI input)

Meanwhile, the Arunachal Pradesh Youth Congress (APYC) has lodged an FIR at the Itanagar police station, demanding the arrest of YouTuber Paras Singh for making “racist remarks and derogatory video” about Arunachal and MLA Ninong Ering.

In a press release, the APYC also demanded a ban on Singh’s YouTube channel.

The Arunachal Indigenous Tribes Forum has also lodged an FIR at the Itanagar police station, seeking booking of Singh under the National Security Act, various provisions of the IPC, the Information Technology Act, and the Scheduled Caste and Scheduled Tribes (Prevention of Atrocities) Act.

“Paras Singh has not only made racist personal remark against Shri Ninong Ering, present MLA, against his demand for banning the renamed PUBG in the name of Battleground Mobile India, but has mocked the culture and ethnicity of the tribal people of Arunachal Pradesh and cast aspersion on the existence of the state of Arunachal Pradesh within India,” it said in the FIR.

The Apatani Youth Association has also strongly condemned Singh for his comments. In a press release, it said it has filed an FIR against Singh. It expressed appreciation for the state government for initiating quick legal action against Singh.