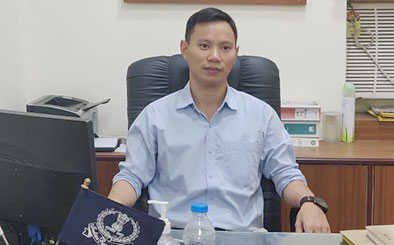 ITANAGAR, 30 May: In what some have termed an instance of denial of justice to a tribal applicant, the Central Administrative Tribunal (CAT) on Thursday dismissed a petition filed by one Dr Ojing Dameng, wherein he had challenged the central medical standing board’s decision that deprived him of physical height relaxation, and thereby a position in the Indian Police Service (IPS).

Dr Dameng, a native of Mliang village in Upper Siang district, was ranked 644 in the Union Public Service Commission Civil Service Examination, 2017, and had been placed at Serial No 2 in the provisional list of IPS officers in the scheduled tribe (ST) category. He had been selected for the Indian Revenue Service (IRS) and has been undergoing training as a probationer in the National Academy of Direct Taxes, Nagpur.

However, on 7 April, 2018, a medical examination was conducted by the central medical standing board at the GTB Hospital in New Delhi, and the board declared Dr Dameng unfit for the post of an IPS officer on the grounds that his height is 162.5 cms, which is 2.5 cms less than the required minimum height of 165 cms for male candidates for the IPS.

The medical standing board rejected Dr Dameng’s referring to Regulation 7 (c) of the All India Services Act, 1951, wherein it is mentioned that candidates belonging to the ST category and to races such as Gorkha, Assamese, Kumaoni, Naga, Garhwali, etc, are entitled to a relaxation of 5 cms in the minimum height required for the IPS.

Dr Dameng contested the medical board’s decision by filing a petition at the CAT in August 2018. However, the tribunal dismissed his petition on 27 May, 2021, stating that, unless the candidate fulfills the requirement of (a) being a scheduled tribe and (b) belonging to the categories such as Gorkhas, Garhwalis, Assamese, Kumaonis, Nagas, etc, he could not be given the benefit of relaxation of height.

In his judgment, Justice L Narasimha Reddy of the CAT pronounced: “The requirement is not only that a candidate must be a scheduled tribe, but he should also belong to any of the categories mentioned above. The applicant does not answer such description. Unless he fulfills the requirement of (a) being scheduled tribe and (b) belonging to the categories such as Gorkhas, Garhwalis, Assamese, Kumaonis, Nagaland, etc, he cannot be extended the benefit of relaxation of height.”

Dr Dameng is an ST candidate from Arunachal, where the indigenous population is tribal. A large population of the state includes people with lower physical stature as compared to people from other states. Dr Dameng was denied the benefit because Arunachalees are not mentioned in the regulation extending the benefit of relaxation in height.

The All India Services Act of 1951 is a post-independence act, when Arunachal was known as NEFA and came under the Assam government. Arunachal as a UT came into existence in 1972, and attained statehood in 1987.

When contacted, Dr Dameng said, “In the beginning, I thought that it was an open-and-shut case and I would get a favourable judgment from the CAT. But the judgment, which was conveyed to me orally by my advocate on 28 April, 2021, was shocking and unexpected.”

“This is one of those instances where we as Arunachalees are being deprived of what rightfully should have been ours. The very purpose of relaxation for STs is defeated if it is not given to us,” he said.

“Moreover, I fail to understand why there should be a discrepancy in minimum height of the inducted and direct recruit IPS officers,” Dr Dameng said, and appealed to the state government, elected representatives and community-based organizations to take up the matter at the highest level, so that the future generations do not suffer or remain deprived.

It is also learnt that Dr Dameng has written to Chief Minister Pema Khandu, seeking his intervention in the matter.

“Arunachalees should not be deprived of their rightful dues. The case of Dr Ojing Dameng (IRS) is a glaring example as well as an eye-opener, and has exposed the laxity of the state government as well as the negligent attitude of the central government. Losing out a coveted post like IPS is something beyond what can be expressed in words,” Dai said.

Meanwhile, on Friday, the chief minister wrote to union MoS for Personnel, Public Grievances & Pensions, Dr Jitendra Singh, regarding the issue, seeking an amendment to the act.

In his letter, Khandu said, “As per the All India Services Act of 1951, a 5 cm height relaxation (normal eligibility is 165 cm) is given to some ST candidates and those belonging to races such as Assamese, Nagas, Gurkhas, Kumaonis, Garhwalis, etc.”

The CM added that “the service condition was framed in 1951, which has not been updated. Arunachal Pradesh was under the Assam administration when the act was enacted. When the benefit was extended to the Assamese, the spirit would have been to include the tribes of Arunachal Pradesh too.”

“As the minister in charge of DoNER, you are fully aware of the tribal composition of the Northeast and will be able to fully appreciate the seriousness of this issue. Therefore, I earnestly request your good self to urgently look into the matter and necessary directions be made to amend the act in the interest of equity and justice to the deserving candidate from Arunachal Pradesh,” the CM appealed.

It is learnt that the MoS has acknowledged the chief minister’s letter.