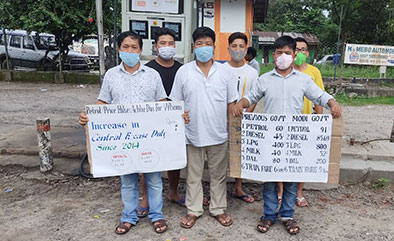 PASIGHAT, 11 Jun: Joining the nationwide protest by the All India Congress Committee over the spiralling rise in the prices of petrol and diesel, the East Siang District Congress Committee (DCC), led by its president Oni Tamuk, staged a protest at M/s Mamang Borang service station here on Friday.

A similar protest was also held in Mebo, it said.

The APCC said that not more than 10 persons were allowed to take part in the protests, in keeping with the Covid SOPs.