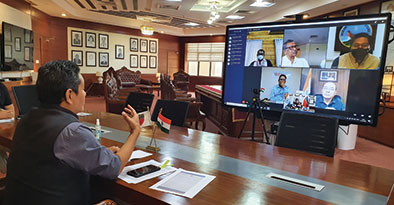 ITANAGAR, 11 Jun: The legislative assembly speakers of the Northeastern states on Friday unanimously resolved to meet and submit a joint memorandum to the central leaders, seeking early initiation of a comprehensive action plan to put an end to the repeated racial discrimination faced by the people of the Northeast in the mainland.

The decision to this effect came following a virtual meeting of the speakers of the Northeast, held under the chairmanship of Arunachal Speaker Pasang D Sona, in the wake of the racial remarks made against sitting MLA Ninong Ering by YouTuber Paras Singh from Ludhiana (Punjab) recently.

Sona expressed grave concern over the racial discrimination and hatred faced by the people of the Northeast in the mainland.

Citing the example of the recent racial remarks against Ering, Sona said this is not the first time that such a thing has happened. “People of the Northeast always face racial discrimination in various forms because of their appearance. Leaders of the Northeast should stand united and demand a comprehensive action plan to put an end to the racial discrimination,” he said.

Sona suggested including an exclusive chapter on the Northeast region – “its geography, culture, ethnicity, lifestyle and its people” – in the NCERT and other textbooks of all educational institutions.

Meghalaya Speaker Metbah Lyngdoh stated that the issue is very serious and the leaders of the entire Northeast states are equally concerned. He suggested taking up the matter jointly with the central leaders for a permanent solution.

Mizoram Speaker Lalrinliana Sailo along with the speakers from Nagaland, Assam and Tripura also echoed similar concern and stated that physical and mental abuse of the people of the Northeast because of their appearance should stop. (Speaker’s PR Cell)