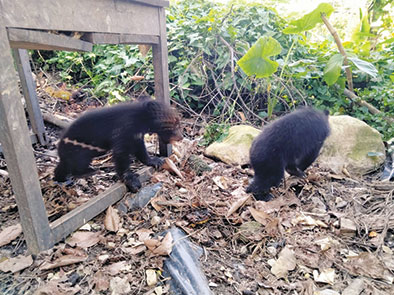 ITANAGAR, 13 Jun: Two orphaned Himalayan black bear (Ursus thibetanus) cubs have been rescued by the ‘ready team’ of the wildlife division from Mayu-I village in Lower Dibang Valley HQ Roing, after being informed about the cubs by Anoko Mega, chairman of Friends of People & Biodiversity, an NGO based in Roing.

The forest department’s ‘ready party’, led by Range Officer Kabuk Lego, under the supervision of Divisional Forest Officer Mori Riba, rescued the cubs from a villager identified as Fagua Umpo. He reported that the cubs – a male and a female around six months old – were loitering near the newly constructed bypass on the Roing-Anini road.

“The species is listed in the IUCN’s endangered list, Schedule-II species in WLPA-1972,” Lego said.

Earlier, a bear cub had been rescued from Dambuk in the same district.

“The Himalayan black bears are endemic to the foothill region of the entire Himalayan belt, extending from Nepal to Arunachal Pradesh, and are on the verge of extinction due to habitat loss and developmental activities leading to fragmentation of their forest habitats, besides poaching and hunting for their bile and claws,” the officer said.

The two rescued cubs are currently at the mini-zoo-cum-rescue centre in Roing and will be soon sent to the Central Bear Rehabilitation Centre of the Pakke Wildlife Sanctuary & Tiger Reserve for better rehabilitation.