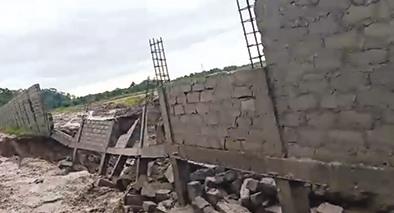 HOLLONGI, 14 Jun: A portion of a wall, measuring around 10 metres, at the greenfield airport site here collapsed on Monday.

According to an official, the damage was caused due to heavy rainfall which led to soil erosion. The earth-cutting in the nearby area, followed by rainfall caused accumulation of soil near the boundary wall, which was recently constructed.

“We have learnt a lesson from it and will undertake necessary rectification,” said an official.

Meanwhile, a team of officials led by Balijan ADC Tasso Gambo visited the site on Monday. Speaking to the media, the ADC informed that he has directed the PWD to make necessary corrections and conduct further study to understand the cause of the incident.

The locals have alleged that the wall collapsed and damaged the road and agricultural land because of unplanned construction.