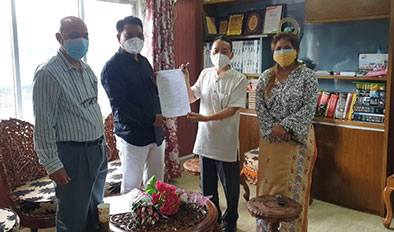 The allotment letter was received by Directorate Service Officers Association of Arunachal (DSOAA) president Yumlam Kaha, who is also the SJETA director.

Speaking on the occasion, Potom informed that a plot measuring 12,420 sq metres has been allotted for the construction of the directorate complex at the RWD complex in Chimpu.

“At present, directorate offices are scattered in different parts of the capital region. For long, the need for a directorate complex to house all the directors in one building was felt for security as well as administrative reasons,” said Potom.

Kaha while expressing happiness over the issuing of the land allotment certificate said the directors would work hard to implement the programmes and policies of the government at the grassroots level.

Trade & Commerce Director Tokong Pertin credited DC Talo Potom, who is a former president of the DSOAA, for getting the directorate complex sanctioned.