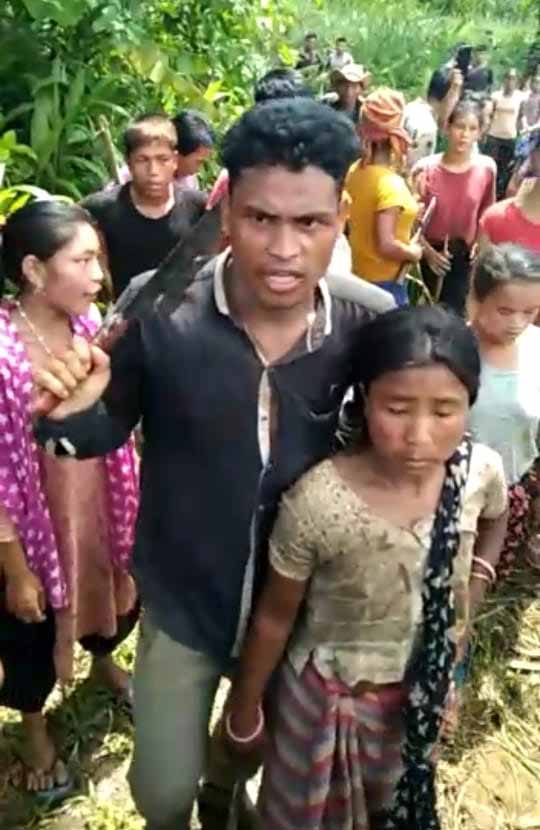 ITANAGAR, 17 Jun: Simmering tension prevailed in Kathan village in Wakro circle of Lohit district on Wednesday after hundreds of Chakma settlers came to the village at around 7-8 pm on Wednesday and allegedly resorted to blank firing to threaten the local residents.

Sources in Tezu claimed that the Chakmas came with machetes and locally-made guns called khanwa and started pelting stones at the village, protesting against what they said was desecration of the Buddha temple established in the area.

However, the local residents alleged that Chakma settlers encroached on Mishmi land and secretly built the temple on it “as part of their covert strategy to evoke religious sentiments across the world, so that they can cover up their encroachment on the indigenous people’s land.”

The Lohit district police had to rush to Kathan village at midnight to defuse the tension. The situation was reportedly brought under control.

Confirming the incident, Wakro Police Station OC Bimal Kumar informed that on Wednesday, a team of police went to the alleged encroached site to physically verify it after getting direction from the district administration.

It is said that, during the verification, the Buddha’s idol was removed from the temple by the locals, but the police could not ascertain who removed it. The removal of the idol apparently provoked the Chakmas.

Reportedly, a local resident of Kathan filed a complaint with the district administration, alleging rampant encroachment on Mishmi land by Chakmas. The Mishmi people are claiming that Chakma settlers encroached on their land and secretly established the temple two kilometres inside the traditional boundary. On the other hand, the Chakmas claimed that the area comes under the designated Chakma village of Boddisatta-I, II and III.

It is said that the Chakmas had also planted betel nut trees in said area, which were destroyed by the local people.

The Lohit district police also claimed that, according to a traditional boundary settlement between the Mishmi and the Singpho communities on 6 April, 2021, the mentioned area falls under the Mishmi community land.

Reacting strongly to the incident, the All Arunachal Pradesh Students’ Union (AAPSU) condemned the purported attempt by the Chakma settlers to occupy the ancestral land of the Mishmi community of Kathan village.

The union termed the act “an ample reflection of the blatant disregard for the law of land and customary practices of our people by the illegal Chakma settlers,” and implored the state government and the district administration to “view the matter seriously by arresting all those culprits who threatened and intimidated the innocent villagers of Khatan by firing upon them.”

“This is the result of non-serious attitude and lack of long-term vision by the people at the helm of affairs that such incidents are rearing their ugly head again. The union will not remain a mute spectator in case of failure by the state government to book the culprits involved in land grabbing and firing incident,” the AAPSU stated.

It said the state government should immediately send a high-level ministerial team to the affected area “to ascertain the factual reason on the ground.”

“The union will also visit the affected area to see for itself the exact ground reality,” the AAPSU said.