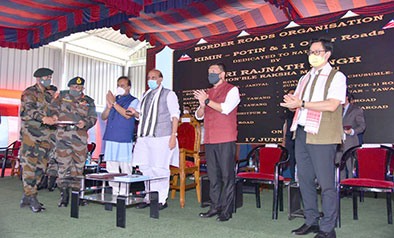 ITANAGAR, 18 Jun: Defence Minister Rajnath Singh’s grandiloquent inauguration of the two-lane road at the Indo-Tibetan Border Police (ITBP) headquarters in Kimin has created a fresh boundary row between Assam and Arunachal, as Kimin town was shown as being in Assam instead of in Arunachal.

The raksha mantri office’s (RMO) official Twitter handle has explicitly mentioned Kimin as being in Assam.

In its tweet, the RMO stated, “Raksha Mantri Shri Rajnath Singh at the inaugural ceremony of border road organization. The programme was held in Assam.”

Unverified sources informed that security arrangement for the defence minister was also entrusted to the Assam Police for the event, even though it was organized in Kimin in Arunachal. A picture of the ITBP Kimin’s signboard, wherein Arunachal’s name has been covered with white paste, is doing the rounds.

Sources informed that the picture of Arunachal’s name covered with white paste has irked the police and the state government. The state’s top police officers had to rush to Kimin on Thursday morning, before the defence minister landed, to alert their Assam counterpart and the ITBP about the insensitive board.

It is also reported that Chief Minister Pema Khandu spoke to Assam Chief Minister Himanta Biswa Sarma regarding the issue on Thursday. However, the incident was hushed up before the people noticed it.

It was also alleged that the mistake was made by the Border Roads Organization (BRO), giving wrong information about Kimin, which is an ADC headquarters in Papum Pare district.

However, when contacted, the BRO denied the allegation of feeding wrong information. A BRO official claimed that it was done due to “strategic reasons which were deliberated at the highest level.”

On being asked, the Tezpur (Assam)-based defence PRO assured to work it out.