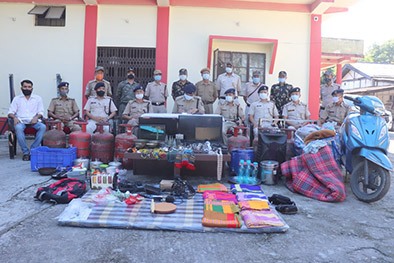 PASIGHAT, 20 Jun: The police here in East Siang district have arrested three burglars and recovered a huge quantity of stolen properties, including local ornaments, LPG cylinders, a scooter and household items from their possession.

The arrested persons have been identified as Taro Hamam (18), of Saw Mill (2 Mile), Karik Jamoh (30), of Jarkong village, and Raja Tayeng, of Gadum village in Mebo, East Siang SP SK Jha said during a press briefing here on Sunday.

Reportedly, all of them have a history of drug addiction.

The police arrested them after several complaints of burglaries had been received from the public.

The recovered items include seven LPG cylinders, a sound system with a microphone, a scooter, two mobile phones, one digital camera, blankets, kitchen items, a wall clock, dolls, mattresses, and local beads like sumbi, elinga, madoli, etc. The stolen items were recovered based on the information they provided during interrogation, the SP said.

He said many complaints of thefts had been received from Pasighat town area, especially from the High Region area. “The thieves mainly targeted unattended houses and sold the stolen items at throwaway prices,” he said.

Stating that buying stolen items knowingly is also an offence, the SP urged the public to refrain from indulging in such activity.