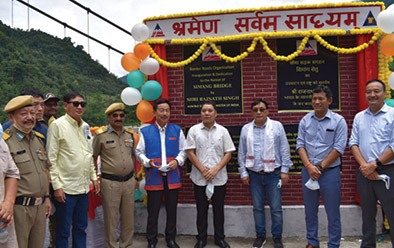 The BRO authorities informed that construction of the bridge was particularly challenging “due to the diversion waterway of approximately 60-70 metres of the Simang river.”

Commending the work done under Project Brahmank, Gao said that “the project is dedicated to the people of composite Siang and is symbolized by the mithun figurehead.”

Libang thanked the defence minister, the chief minister and the BRO “for relentlessly pursuing the project,” and said that the bridge would not only meet the strategic need of the country but also contribute in improving the lives of the people of the region.