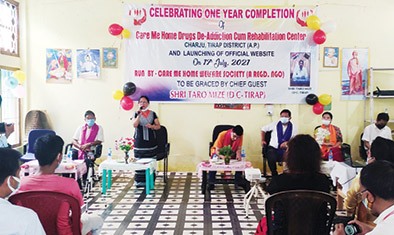 CHARJU, 17 Jul: Tirap DC Taro Mize has asked drug-addict government employees to admit to their addiction before their respective heads of department without any hesitation and undergo treatment.

Mize said that he has submitted a proposal to the SJETA for establishing one more drug de-addiction-cum-rehabilitation centre in Deomali, and that his proposal has been recommended to the Centre by the SJETA special secretary for approval.

The DC was addressing a meeting organized to mark the completion of one year of Care Me Home Drugs De-addiction-cum-Rehabilitation Centre (CMHDDACRC) here in Tirap district on Saturday.

The DC also inaugurated a 63 kva mini power substation specially meant for the de-addiction centre here, which he said would also benefit the power consumers of Charju area.

were received from the public to improve the voltage quality.

CMHDDACRC chairperson Sontung Bangsia informed that some drug-addict government employees are currently undergoing treatment at the de-addiction centre and they are temporarily lodged at the Charju primary school.

“So far, 66 patients out of 88 have fully recovered and discharged from the centres,” informed Dr Chelo Pumao.