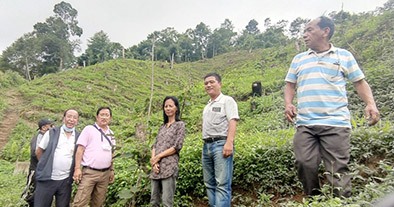 ZIRO, 18 Jul: Lower Subansiri Deputy Commissioner Somcha Lowang on Sunday inspected the kiwi gardens of the beneficiaries under the Chief Minister’s Sashakt Kisan Yojana (CMSKY) and the CCI schemes which are being implemented by the horticulture department in the district.

Lauding District Horticulture Officer Komri Murtem, his staff and the kiwi growers for their efforts in promoting kiwi cultivation, Lowang advised the beneficiaries to “continue the same spirit to reap the bumper harvest and not depend only on government assistance.”

She directed the officials of the horticulture department to regularly impart training to the farmers.

Murtem, who accompanied the DC, informed that field training on scientific cultivation practices has been imparted to the beneficiaries.

Clarifying the matter of failure to procure and supply GI wire and angle posts under the CMSKY and the CCI in the last financial year, Murtem informed that the fund had been provided only for procurement of planting materials. He appealed to the DC to pursue the matter with the government “as GI wire and angle posts are two of the important components of kiwi cultivation which are expensive for the beneficiaries to procure from their end.”