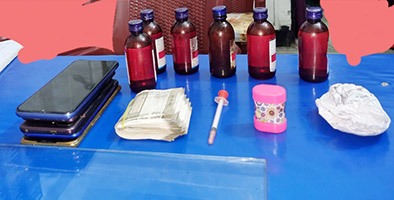 PASIGHAT, 20 Jul: A gang of seven drug peddlers, including two from East Siang HQ Pasighat, was arrested by the Assam Police from Laimekuri area in Assam, bordering Nari subdivision in Lower Siang district, on Tuesday.

The two youths from Pasighat have been identified as John Mukherjee (21) and Miling Moyong (25). The other five peddlers belong to Laimekuri in Assam.

The police seized 5 gms of brown sugar-like substance, 17 gms of ganja, six bottles of banned cough syrup, Rs 21,000 in cash, and an injection syringe from their possession. The police also seized a Maruti 800 car (AR-09-5693) used by the gang.

A case under the NDPS Act has been registered at the Jonai police station against the peddlers, and they are currently in police custody.