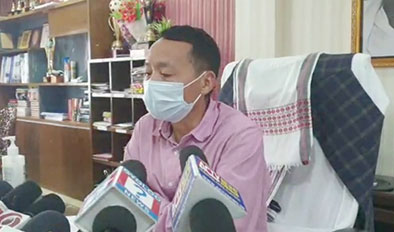 ITANAGAR, 25 Jul: The Arunachal Pradesh Staff Selection Board (APSSB) is set to conduct its combined graduate level (CGL) exam at various centres spread across the state on 1 August.

A total of 19,193 candidates have been selected to appear for the UDC exam, which will be held in the Itanagar capital region (ICR), Tawang, Bomdila, Seppa, Pasighat, Aalo, Khonsa, Changlang, Namsai, Tezu and Ziro.

Briefing the press on the security arrangements for the exam in the capital, ICR Deputy Commissioner Talo Potom requested the candidates to go through the instructions carefully to avoid problems during the day of the exam.

While the exam will be held from 10 am to 1 pm, the candidates have been asked to start arriving from 7 am with their admit cards and ID proof.

It was also made clear that the candidates will not be allowed to carry any additional objects with them to the exam hall, and that they will be provided with black ballpoint pens inside the hall by the board.

The DC said that the candidates will be provided with envelopes to keep some of their belongings, such as mobile phones and purses, “but we will not take responsibility if an item is lost or misplaced, and it is better that they do not carry any items with them.”

Candidates without facemask will not be allowed to enter the exam venue, but will have to remove their masks for verification, whenever required, by the exam functionaries.

The candidates will also not be allowed to park their vehicles near the exam hall.

“Vehicles will have to be parked at least 50 metres away from the exam centres,” the DC said.

He said that the rules will apply to all centres across the state, and sought cooperation from all the candidates.