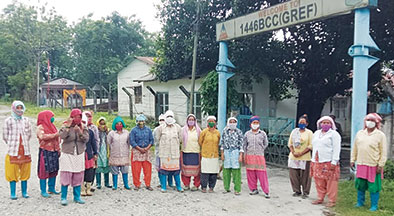 TEZU, 25 Jul: The casual paid labourers (CPL) working under Demwe-based 48 BRTF are set to go on a strike from 26 to 28 July, putting a complete stop on any site work in Lohit district.

The Lohit district unit of the Border Roads Organization Labourer’s Union (BROLU) informed that this will be the first phase of their indefinite strike against the BRO’s ill-treatment of its CPLs.

The BROLU had earlier alleged that the 48 BRTF 99 APO denied wages to almost 300 CPLs working for the organization, and that nearly 200 CPLs have been discharged from duty amid the ongoing second wave of Covid-19. The number has risen to more than 260 since then, as more CPLs have reportedly been dismissed from their duties.

The OC of the 1444 BCC BRTF had denied the occurrence of any such dismissals or denied wages. However, the affected CPLs have a different story to tell.

The CPLs said that they were dismissed from their duties without any warning. “We have no other means of income. We have forever been working for the organization. In some families, both husband and wife have been removed from their jobs. How are we going to survive without any earning? We have also not been paid our due wages,” they said.

The CPLs have also alleged that, although they have been discharged from their duties without any warning or reason, the BRO has brought in labourers from outside the state to work for them. “Just to make space for these labourers from outside, we are being subjected to this injustice,” said the CPLs.

The BROLU said that it has been compelled to go on a strike because all its prayers for consideration of the CPLs’ grievances are “falling on deaf ears.”

“We have tried to reason with the BRTF officials. Asked help from the Lohit DC as well as the district labour and employment officer, but to no avail. Therefore, the last resort to fight for our right is to take this route to make our voices heard,” said district BROLU president Yalum Ama.

“This is pure violation of human rights and the labour law by depriving labourers of their means of livelihood, and violation of the Covid guidelines which clearly mentions that such labourers are entitled to their wages during the pandemic period,” he said.

The BROLU said that “the commander of the 48 BRTF would wholly be responsible for any untoward incident that might occur during the strike.”