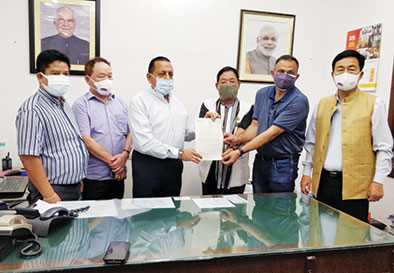 The delegation apprised the union minister of

various activities undertaken by the APSCST and the progress made in the field of science and technology. The delegation also apprised the minister of the progress of the project for establishing the Centre for Bio-resources and Sustainable Development in Kimin in Arunachal.

The team also submitted a representation, seeking resolution of issues related to the annual core grant received from the union science & technology department, sanctioning of the pending projects submitted to the DST, releasing of the last installment of grant by the biotechnology department, and inauguration of the Centre of Excellence for Bio-resources and Sustainable Development in Kimin.

In a release, the department informed that the union minister expressed happiness over the progress made so far and opined that Arunachal has vast potential to be developed further. The minister also assured to visit the state in October to inaugurate the Centre of Excellence for Bio-resources and Sustainable Development.