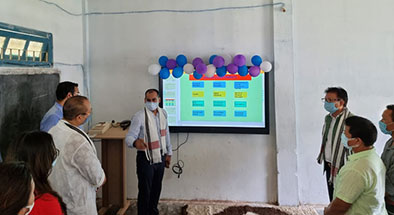 The smart classrooms were donated by the Himalayan University as part of its CSR initiatives.

Underscoring the importance of information technology and its usage in the modern education system, Tedir exhorted the teaching community to “keep abreast of the latest technologies and computer knowledge to adapt to the evolving dynamics of modern education.”

Interacting with the principal, the headmaster (in-charge) and the teachers of the two schools, Tedir reminded them of their responsibility to create a pool of educated and responsible citizens.

Lauding the generosity of the Himalayan University, he said such noble acts would always be cherished by the students.

Later, the minister reviewed the issues related to online classes and modalities to improve the teaching process with the DDSE, the BEO, the BRCC and the CRCC of the district.