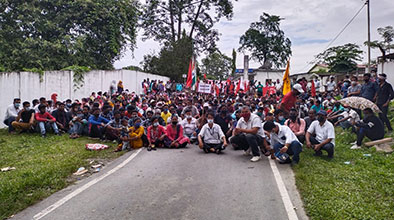 TEZU, 26 Jul: Over 400 casual paid labourers (CPL) of Demwe-based 48 BRTF gathered near the 48 BRTF, 99 APO commander’s office on Monday and protested against the injustice meted out to the CPLs by the organization, including not paying them their wages.

The protest was organized by the Lohit district unit of the Border Roads Organization Labourer’s Union (BROLU).

The protesters demanded immediate release of their wages “due for the period of Covid-19 lockdown in Lohit district,” as well as the period when their locality had been notified as a micro-containment zone.

They also demanded “discharge of all new CPLs who were recently brought in from other states,” and re-engaging all the local CPLs who were removed from their duties without any valid reason, within one week.

Their demands also include compulsory vaccination of all the CPLs of the BRO.

BROLU president Yalum Ama informed that the 48 BRTF has assured to pay the due wages as and when direction to do so is received from the higher BRO authorities.

“48 BRTF Second-in-Command Sanjay Narayan has assured that all the new CPLs from other states will be removed from their duties and the local CPLs will be able to rejoin as per availability of vacant posts. In this regard, we have agreed to stop our three days’ no site work strike here. However, if the BRO fails to fulfil its assurance, we will start the second phase of our agitation from 5 to 7 August,” Ama said.