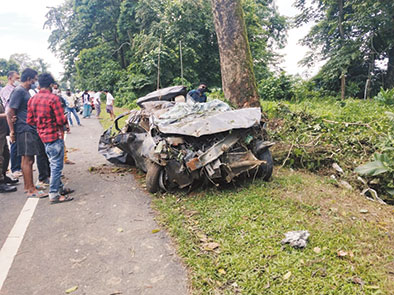 ITANAGAR, 26 Jul: Three persons, including a minor, died in a road accident that occurred on Sunday at around 10:45 pm at the Tengapani reserve area, about 15 kms away from Namsai.

The deceased have been identified as Jugal Hazarika (32) in the driving seat, Bhegu Tshring (32) and Kongkong Tshring (5) – all males.

While there were no eyewitnesses, the car, a Ford Figo Aspire (AR-02-4253), was found crashed into a tree. Sources informed that Jugal and Bhegu were both staffers of the Airtel telecom company. They had gone to Chowkham for the weekend and were returning to Mahadevpur.

The bodies were reportedly stuck inside the car, but later taken out with the help of the Namsai police and an NDRF team.

The bodies were brought to the district hospital in Namsai for postmortem and other formalities.