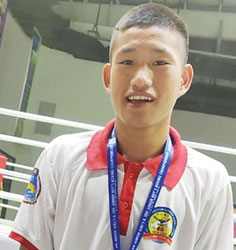 ITANAGAR, 29 Jul: John Lapung of Arunachal is set for a medal finish in the 50-52 kg category after he entered the semifinals of the 3rd Boys’ Junior National Boxing Championship, 2021, in Sonepat, Haryana, on Thursday night.

He won the quarterfinal match against his opponent from Madhya Pradesh via a 4-1 split decision.

Ruba Juju, Atul Kino, Athuno Linggi and Fenia Paffa could not advance to the semifinals.

Linggi also lost his quarterfinal bout against Maharashtra by a 2-3 split decision. Paffa was defeated by his opponent from Haryana by unanimous decision (5-0).

Gora Yalung lost her quarterfinal bout against Haryana by unanimous decision (5-0) in the 4th Girls’ National Boxing Championship being held at the same venue.