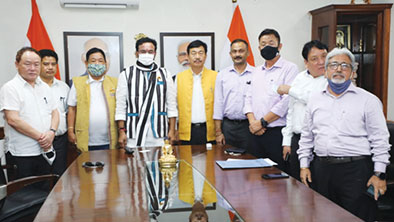 NEW DELHI, 29 Jul: Union Minister for Development of North Eastern Region (DoNER) G Kishan Reddy on Thursday assured that he would look into the proposal for setting up six Category-II science centres in various parts of Arunachal.

A delegation from Arunachal, comprising Lok Sabha member Tapir Gao, Rajya Sabha member Nabam Rebia and Arunachal Pradesh State Council for Science & Technology (APSCST) Chairman Bamang Mangha called on the minister at his office here on Thursday and submitted a proposal for setting up six such science centres in the state.

The proposal was submitted under the scheme for ‘promotion of culture of science’, which is being implemented by the union culture ministry through Kolkata (WB)-based National Council for Science Museums.

The delegation also called on union Power Minister Raj Kumar Singh at his office on the same day and submitted a representation seeking sanctioning of 12 micro hydel projects in Arunachal.

The union minister conveyed to the delegation that his office would look into the matter.