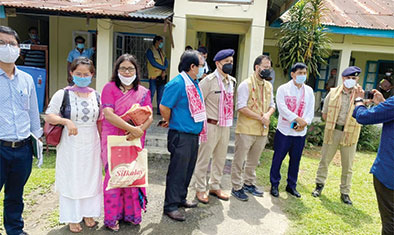 DEOMALI, 30 Jul: Various issues pertaining to the interstate boundary areas of Arunachal and Assam were discussed during an ‘interstate border districts coordination meeting’ between administrative, police and forest officers of Dibrugarh (Assam) and Tirap district, which was held here on Friday.

The team from Dibrugarh proposed the “goodwill meeting,” which was accepted by the Tirap DC, and the Dibrugarh team was invited to Tirap. It was decided in the meeting to maintain

the status quo, coordination and cordial relationship between the people of both the states in the boundary areas.

It was also decided that the police and forest officers of Assam and Arunachal would carry out joint patrolling to tackle illegal timber and mining operation in the boundary areas.

The two DCs agreed to conduct such ‘goodwill meetings’ regularly to ensure cordial relations between the two states.