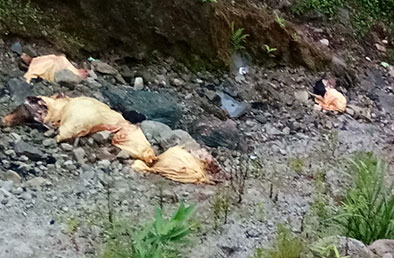 ITANAGAR, 1 Aug: Rampant cattle theft is reportedly on the rise in Nyishi-inhabited districts like East Kameng, Pakke-Kessang and some areas in Yachuli, Yazali and other places.

It was reported that, on the intervening night of 28 and 29 July, a female mithun belonging to one Hari Nabum was stolen by miscreants. Nabum found the remains of the female mithun along the boundary between Leporiang and Pakke-Kessang.

Earlier, one Atung Tok, a gaon burah of Polove village in Pakke-Kessang district, lost his mithun near his village on 10 July.

Another GB, Tada Techi, of Khodaso village, found his bovine’s head inside a culvert on National Highway 13, near Leporiang. The decapitated bovine’s head had a gunshot wound on it.

Confirming the report, Pakke-Kessang SP Habung Hailyang informed that a case has been registered and the matter is under investigation.

Appalled by the rising cattle theft cases, particularly in Pakke-Kessang district, Padang Teli Camdir, a resident of Riloh village, informed that the modus operandi in all the theft cases was the same “as they took only the meaty parts and left the mithuns’ heads, legs, etc, behind.”

Camdir further informed that miscreants normally commit the crime at night, adding that, ever since the highway was completed, such theft cases are on the rise.

“The locals need to keep vigil at night, and we need to construct a mithun vigilance gate to check such cases,” Camdir opined.

It is reported that the locals normally do not report cattle theft cases to the police. They settle the cases at the local level, even if the thieves are caught red-handed.

“Several mithun theft cases have been reported in East Kameng district, but this issue couldn’t be addressed, except in a few cases where the owners are vigilant. It has become a regular activity for the thieves, who are yet to be caught,” said EKSWCO chairman Bharat Sonam.

He opined that microchipping cattle, as is done with cows in advanced countries, would reduce cases related to ownership claims and stealing. He said that identification method like earmarking is not feasible in certain cases, and suggested constituting “vigilance committee at the panchayat level” to check the rampant theft.

The rise in the theft cases has sparked a social debate among the tribes over one of the state’s most valued animals as such thefts are a cause for worry for those who depend economically on mithuns.

To check cattle theft and resolve cattle-related disputes, the Apatani community had come up with a vigilance committee called Subu Luth Committee, Ziro. The committee was formed jointly with the Nyishi community way back in 2005.

Mithun (Bos frontalis) is regarded as a sacred semi-domesticated animal in the socioeconomic life of the Tani tribes of Arunachal. It also has great cultural significance.