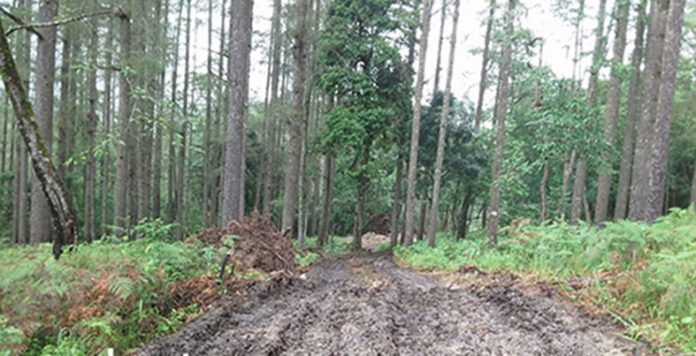 ITANAGAR, 2 Aug: Villagers affected by the Dembuen-Bruni and the Mipi-Basam road projects in Dibang Valley district have raised objection to the construction of the roads by the National Highways and Infrastructure Development Corporation Ltd (NHIDCL) on their private land and the Dibang Wildlife Sanctuary (DWS) without obtaining forest/wildlife clearance, and asked for an immediate halt on further construction.

The residents said that the corporation is constructing the 16-km long Dembuen-Bruni road through 5.6 kms of their private land, and the rest in the reserve area of the DWS.

In a complaint letter submitted to the forest ministry’s inspector general of forest in Meghalaya, the PCCF in Itanagar and the Dibang Valley deputy commissioner, the villagers informed that the NHIDCL has started road construction “by damaging pristine coniferous forests along the Dri river and the Mathu river on large scale.”

They said that pine species, bamboo species, and other A, B, C and D class trees are being felled in huge numbers and the “husks” generated by earth-cutting are directly dumped into the Dri and the Mathu rivers, causing damage to the rivers’ ecology.

Claiming that the NHIDCL has not obtained forest clearance from the wildlife board or environment clearance from the MoEF and the state government, the villagers termed it a violation of the provisions of the Forest Conservation Act of 1980 and the Wild Life Protection Act, 1972.

The villagers also sought action against the divisional forest officer (DFO) of the Anini social forestry division “for turning a blind eye to the several complaints made to his office about the violation.”

They alleged that “the DFO has instead written to the department, declaring our ancestral land as un-classed state forest (USF) area and our nurtured trees and plants as natural forest.” They added that, “as per the 2013 acts of Parliament, all trees and plants standing on our plots are to be compensated for. Our land is still to be acquired, and forest/environment clearances to be obtained.”

They claimed that the Anini DFO has not been entertaining “the genuine claims made by the affected beneficiaries for the values of trees and plants on private lands in the district.”

Seeking the inspector general’s intervention and strict action against the NHIDCL and the Anini DFO “as per relevant penalties under the Forest Conservation Act, 1980,” the villagers said that, if their complaint is not heard, they would have their grievances redressed “through appropriate forum by means of public interest litigation and FIR against the GM, NHIDCL Roing, and DFO Anini, so that no further distraction is caused by the erring officers.”

Earlier, on 20 May, the DC had also denied work permission till the land was fully acquired as the land acquisition proceedings were ongoing for the construction of the Mipi-Basam and the Dembuen-Bruni roads.

However, NHIDCL GM Sunil Kumar said that the corporation has been granted forest clearance by the state, “which has been processed and is in the regional office in Itanagar.”

“Because this is an ICBR (Indo-China border road), the road is very important in terms of defence, and there is pressure to complete it early,” he said. Admitting that the DC had denied permission earlier, he said, “We were given permission for a few portions later.”

Regarding paying compensation to the villagers, the GM said, “We don’t have a say in the compensation. The compensation decided by the state government has already been deposited in March.”

This daily tried to reach out to the Anini DFO but was unable to get a statement.