The Government of Arunachal Pradesh in its documents and books, in the yearly diary published by the Information & Public Relations (IPR) Department and also in government functions and public speeches cites that Arunachal Pradesh is home to 26 major tribes and 110 sub tribes.

However, no government department has published the names of either the 26 major tribes, or the names of the 110 sub tribes.

When I was the secretary of the state IPR department and also the department of Cultural Affairs, the issue of finding out the names of 26 major tribes and 110 minor tribes was brought up on numerous occasions. Inter-department consultations were held between the departments of IPR, Home, Political, Tourism and Cultural Affairs on this issue. Still, neither the names of the 26 major tribes and the 110 sub tribes could be confirmed, nor a way ahead to find out their names could be homed in.

This small article is a humble attempt to explore how many tribes are there and whether Arunachal Pradesh is really home to 26 major tribes and 110 minor tribes, or it is just a myth, which accidentally got into the vocabulary of government speeches and its publications and caught the public imagination.

The first foray has been made by examining constitutional provisions. The names of tribes of Arunachal Pradesh is listed in the Part XVIII of Constitution (Schedule Tribe) Order 1950 (Part III Rules and Orders under Constitution) which has been amended from time to time.

The latest order under this constitutional provision states: All tribes in the state including: Abor, Aka, Apatani , Nyishi,  Galo, Khampti, Khowa, Mishmi, Momba, Any Naga Tribe, Sherdukpen, Singpho, Hrusso, Tagin, Khamba and Adi.

The names of these 16 tribes are only indicative. The constitution clearly states that “all tribes living in the state of Arunachal Pradesh, including these sixteen tribes.”

The latest Constitutional Amendment Bill, 2021 for modifying Part-XVIII of the Schedule to the Constitution (Scheduled Tribes) Order, 1950, relating to the state of Arunachal Pradesh was passed by the Rajya Sabha on 5th August, 2021 and Lok Sabha on 9th August, 2021.

Once the bill becomes the act after the Presidential assent, the indicative names of Scheduled Tribes as listed in the Part-XVIII of Schedule to the Constitution (Schedules Tribes) Order, 1950 will be :-

Since the names of Tribes are indicative only, can any other tribe other than those listed in constitution have the rights and privileges of indigenous tribes of Arunachal Pradesh? It is important to note that all other states have definite lists of names of tribals in their state. However, in the case of Arunachal Pradesh, the subject is open to interpretations and assumptions.

It is a matter of concern that even after 70 years of India’s Independence and 50 years of existence of Arunachal Pradesh as a separate UT/ state government, the Constitution of India still does not have the definite list of scheduled tribes living in Arunachal Pradesh.

Now, let’s proceed to see if the lists of 26 major tribes and 110 minor tribes are reflected in the census records. The decadal census is carried out by the Registrar General of India. The number of tribes in the census is returned based on their mother tongue. In a way, it is also a survey of how many tribal languages are spoken in the state of Arunachal Pradesh.

The author could not asses any concrete and detailed list of tribes prior to the 1961 Census data. The Directorate of Public Relation, Government of Arunachal Pradesh, in the year 1972 had brought out a compendium of milestones of Arunachal Pradesh from 1947 to 1972. In this book, the Directorate of Public Relations, published names of 22 major tribes quoting the source as Census of 1961, published by the Registrar General of India.

The next data on publication of names of major tribes of Arunachal Pradesh by the Registrar General of India is based on the 2001 census. They are reflected in Table 1. The detailed lists of each tribe and their population based on Census 1971 and 2011, which were published by the Registrar General of India, Government of India is brought out in Table 2.

But a cursory look at the table will show the discrepancies and mistakes in listing the names of the tribes. Many tribes have been listed with different names and some of the names of tribes have been wrongly entered. Hence, it can safely be said that, names of 26 major tribes have not been published by the Registrar General of India clearly and definitely.

Population of Major Scheduled Tribes of Arunachal Pradesh as per Census 1961 and Census 2001 as published by Registrar General of India. 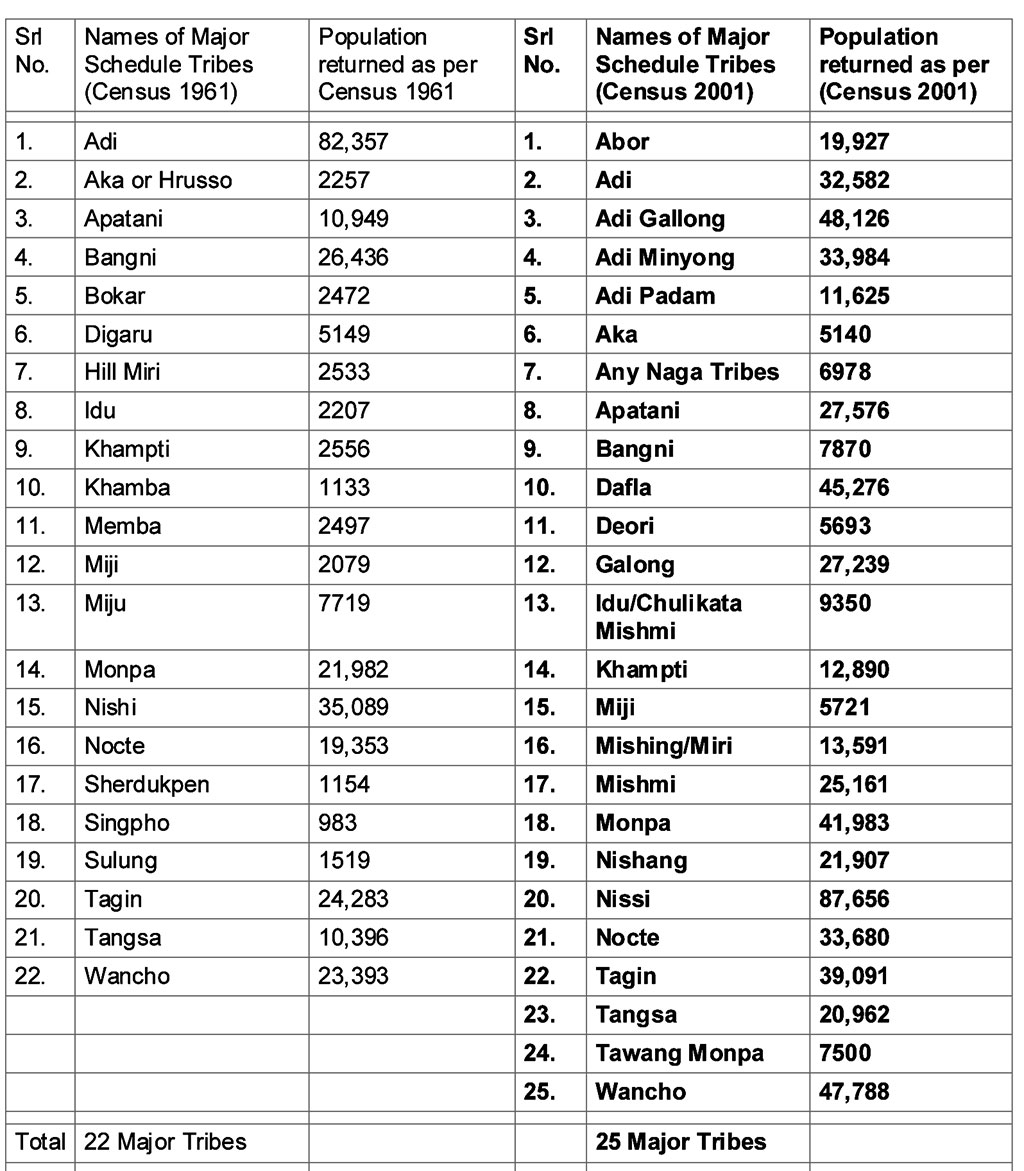 The Table 2 below reflects the detailed names of the tribes and their population as returned in the Census 1971 and Census 2011.

The cursory look at the names of the tribes in the census 1971 and 2011 will show that there are gross and glaring mistakes in the names of the tribes. Many tribes have been wrongly reflected by different names. For example, the Nysihi is one tribe, but have been reflected in both censuses in various names of Nishang, Nissi, Nyishi, Bangni, etc. So also, the names of the Adi tribe, which have been reflected with various names like Adi, Abor, Adi Bori, Adi Padam, etc. The Tangsa tribe is also returned with many names and very often their populations are reflected in single digits. Therefore, the names and nomenclature of tribes as brought by the Census is neither authentic, definite or correct.

The detail names of schedule tribes of Arunachal Pradesh and their populations as brought out in Census 1971 and Census 2011.

The matter should not be left open-ended to interpretations and assumptions. The decadal census of 2021 is in the process. The Government of Arunachal can sensitize the census enumerators to return the names of tribes and language they speak correctly.

In this matter, the community-based organizations and Arunachal Indigenous Tribal Forum needs to sensitize the local population on the importance of correctly getting their tribe names and mother tongues correctly enumerated. The awareness and sensitization programmes can be organized by the community-based organizations for their respective communities on how to get their tribes name returned correctly in the census records.

The state of Arunachal Pradesh is a very sensitive border state and it is of utmost importance that the indigenous people are protected and made to feel secure and comfortable in their own traditional homeland. The all-important step towards securing their confidence and trust in their own destiny as integral part of India will be by enabling them to answer with definiteness the surreptitious question “who am I” that at times may be gnawing the soul of the community. This could be achieved by a definite constitutional provision of names of indigenous tribes of Arunachal Pradesh and their rights and responsibilities in a clear and succinct manner.

NB: This article has been penned in my individual capacity and it does not reflect official position that I am holding as on date. The detail data on population and names of the tribes has been sourced from the Constitution of India and the publications by the Registrar General of India on the various censuses carried out by them.