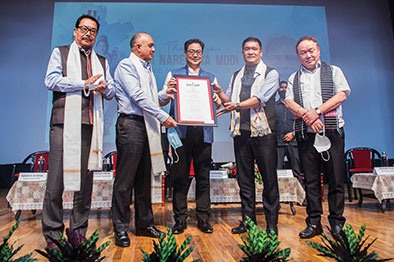 ITANAGAR, 19 Aug: Expressing gratitude to the Government of India under the leadership of Prime Minister Narendra Modi for passing the Constitution (Scheduled Tribes) Order (Amendment) Bill, 2021, in the recent session of the Parliament, Chief Minister Pema Khandu termed it “fulfilment of a demand pending since decades.”

Khandu expressed optimism that this will go a long way to ensure the rights of every tribe in the state.

In a thanksgiving programme here on Thursday evening at the DK Convention Centre, Khandu said, “The inclusion of the left-out indigenous tribes of the state in the constitutional list would not have been possible without the constant persuasion by the three MPs from the state, Kiren Rijiju, Tapir Gao and Nabam Rebia, and the concern of Prime Minister Narendra Modi.”

Felicitating Rijiju on his first visit to his home state as cabinet minister for Law and Justice, Khandu hailed the BJP government at the centre for recognizing Rijiju’s calibre and appointing him, a tribal from Arunachal Pradesh, as a cabinet minister of such an important portfolio.

“It is a proud moment for us as Rijiju is not only the first Arunachalee to become a cabinet minister but the first tribal in the country to hold the Law and Justice portfolio,” he said.

Khandu requested Rijiju to positively consider and fulfil the local demand for the establishment of a permanent High Court for the state. He informed that the high court building coming up at the present Itanagar Bench of Gauhati High Court site at Naharlagun is designed in a way to accommodate an independent High Court. (CM’s PR Cell)