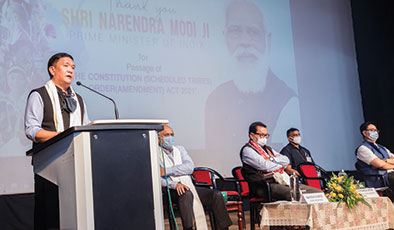 ITANAGAR, 19 Aug: Chief Minister Pema Khandu said that the state government is working high time to resolve the inter-state boundary issues with Assam and a high power committee will hold a meeting with all MLAs and deputy commissioners of the districts sharing boundaries with Assam on 26 August.

Taking the opportune moment of presence of CBO members in a thanksgiving ceremony here at the DK Convention Centre, Khandu also informed that “The High Power Committee under the chairmanship of Home Minister Bamang Felix has already conducted several rounds of consultative meetings with stakeholders on the matter and will hold a meeting on the 26th.”

Khandu said that he has already spoken to his Assam counterpart and they have agreed to resolve all issues through bilateral talks sitting across the table. He further revealed that the groundwork under process is based on the recommendations made by the one-man Local Boundary Commission constituted by the Supreme Court.

On the contentious issue of Chakma and Hajong refugees settled in the state, he reiterated that as per prevailing Acts and laws no non-indigenous tribe of Arunachal Pradesh can permanently settle in the state.

“The Chakma and Hajong settlers are also human. They too are suffering a lot here. Therefore, we got to evolve a win-win solution for both, them and our indigenous tribes,” he pointed and urged the MPs, particularly Rijiju to pursue with the central leadership for a permanent solution. (CM’s PR Cell)