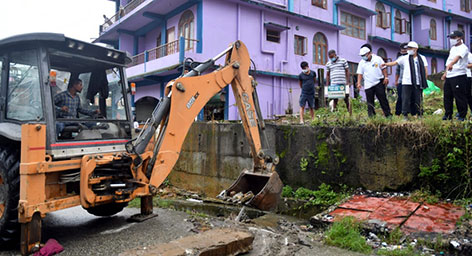 ITANAGAR, 28 Aug: Itanagar Capital Region (ICR) Deputy Commissioner Talo Potom along with the officers of the administration carried out a ‘mass social service-cum-drug awareness campaign’ on the themes ‘Say no to drugs’ and ‘Itanagar safai abhiyan’ in various wards of Itanagar circle on Saturday.

Braving the rain, IMC corporators and people from all walks of life took part in the drive.

Lauding the determination of the people to participate in the social service, the DC exhorted one and all to continue with the same zeal and enthusiasm in making Itanagar one of the cleanest cities.

“The mass cleanliness drive and drug awareness campaign have been conducted at the initiative of Chief Secretary Naresh Kumar,” the DC said, and appealed to all to take part in the campaign.

Emphasizing on collaborative efforts from all sections of the society, the DC said, “The state government has taken many initiatives with regard to cleanliness, drug de-addiction and rehabilitation, but the entire exercise would be futile without the support of the denizens of the state.”

Potom also urged the corporators and ward members to generate awareness on civic sense and encourage the residents to keep their homes and surroundings clean.

However, the drive could be conducted only in a few wards due to heavy rain, and it will be conducted in the remaining wards when weather favours.

The Narcotics Control Boards’ state nodal officer Oli Koyu said that “social acceptance of a drug addict is the most important thing to help a person recover.”

He said community mobilization is the most important tool against the drug menace.

Koyu said that the state government is making every effort to control the menace of drugs, adding that a rehabilitation centre will come up soon in the capital region.

RBSK MO Dr Pulin Kabak Nabam highlighted the “health aspect of a drug addict.” She spoke about the social stigma attached to a drug addict and “how we should wholeheartedly welcome and help those who are trying to give up the addiction.”

The DC distributed ‘I am Covid-19 vaccinated’ badges to all those who have taken the second dose of the vaccine.

The DC was accompanied by, among others, EAC Aying Perme, DACO Tem Kaya and ‘Arunachal Idol’ finalist and YouTuber Yami Puri. (DIPRO)