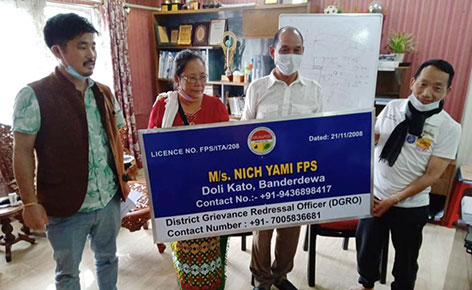 ITANAGAR, 29 Aug: Itanagar Capital Region (ICR) DC Talo Potom launched uniform signboards for all the 123 fair price shops (FPS) and 34 SKO retailers of the three administrative circles of the ICR at his office here on Sunday.

Each of the signboards has details of licence number, authorized location, name of the FPS and the contact numbers of the FPS dealer and the district grievance redressal officer (DGRO).

The DC appealed to all the stakeholders to “cooperate in achieving 100 percent Aadhaar seeding of ration cards in order to avoid curtailment of foodgrains allocation in respect of the capital region.”

He also advised the FPS dealers to adhere to the government guidelines issued from time to time.

After listening to the grievances of the All Capital Complex Fair Price Shop Dealers’ Welfare Association (ACCFPSDWA), Potom asked

the association to submit its grievances in a memorandum for placing it before the higher authorities.

DFCSO Amit Bengia informed that the signboards have been especially designed for the consumers and inspecting officials to easily identify the FPS’.

“Any aggrieved valid ration card holder can drop SMS/WhatsApp message to the DGRO for grievance, if any,” he said.

SDFCSO Nabam Anand requested all the FPS dealers to “ensure 100 percent transaction of NFSA foodgrains through the ePOS device only.”

ACCFPSDWA president Bamang Apa said, “The FPS dealers purchase Antodaya Anna Yojana and priority household foodgrains @ Rs 3 per kg and sell it to the identified beneficiaries at the purchased rate since the implementation of the NFSA in Arunachal Pradesh.”

He further said that “no dealers’ margin has been released since November 2018, which they are entitled to at Rs 1.43 per kg and no transit loss of foodgrains is compensated to the FPS dealers, due to which they are facing untold financial hardships to run the FPS’.”

ACCFPSDWA advisor Tarh Miri lauded the works carried out by the FPS dealers across the state during the national lockdown last year “against all odds.”

Informing that many FPS dealers got infected with the Covid-19 virus while serving the consumers, Miri expressed disappointment that no incentive or recognition has been given to the selfless workers.

“No PPE kits were made available to the essential service providers like FPS dealers, PDS transporters, officers/officials of food and civil supplies department,” he said.

On behalf of the association, he requested the DC to take up the matter with the state government “to allocate PDS items based on the population criteria and release the pending FPS dealers’ margin at the earliest.”

Among others, the programme was attended by ADC Talom Dupak and officials of the ICR food & civil supplies department. (DIPRO)