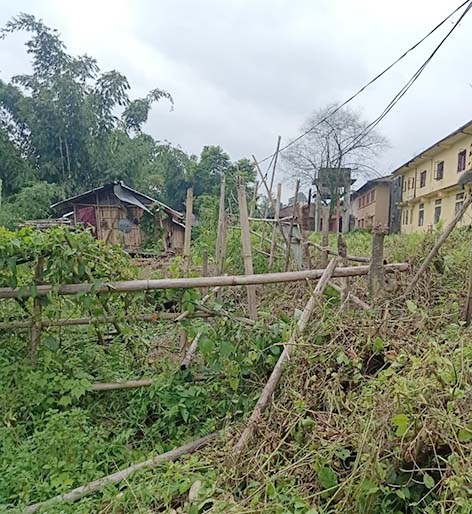 The campus is shrinking day by day as encroachers, emboldened by the failure of the ICR administration to take action, are further grabbing the land belonging to RGGP.

Situated at Vivek Vihar, near DNG College, RGGP is considered to be one of the top polytechnic institutes in the Northeast region. Students from across India, including from north Indian states like Bihar, are currently studying at the institute.

It has the rare distinction of being recognized by the National Board of Accreditation, and is also ISO certified. Despite its achievements and vast potential for future growth, RGGP is now facing a serious threat from the land grabbers settled along the periphery of the campus.

“The boundary walls have been destroyed. Taking advantage of the lack of boundaries, people are encroaching on the land. They have constructed houses. Due to this, there is constant movement of outsiders in the campus. This is creating trouble for the campus dwellers. Trespassing is a big problem,” said an RGGP official.

Incidents of theft and assault on staffers in the campus by antisocial elements are also on the rise.

Despite several attempts by the RGGP authorities to raise the matter with the authorities concerned, there has been no action in this regard. “This problem of illegal encroachment has been going on for the last many years. Earlier, student bodies like the AAPSU, the ANSU, etc, also tried to intervene and bring an end to the menace. However, the situation has only gone from bad to worse in the last five years,” the official said.

The academic atmosphere is being totally destroyed. The students, teachers and other campus dwellers are feeling insecure. This will hurt the image of RGGP. Students from the rest of the country will be reluctant to take admission,” the official added.

“First of all, the boundary wall should be constructed on priority. The capital administration should take strong action against the land encroachers and trespassers. This will send out a strong message to the illegal encroachers,” the lecturer added.