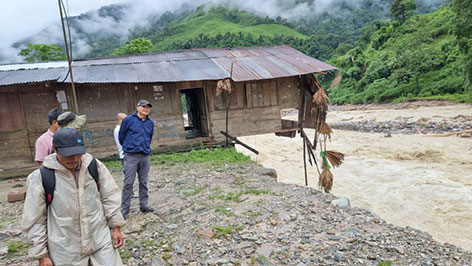 BOLENG, 30 Aug: Siang DC Atul Tayeng visited Suple village on Sunday to take stock of the damages caused by the recent torrential rain and flood in the Simang and the Hubbung rivers.

He visited the site where a Bailey bridge that connected six upstream villages collapsed on 26 August. He also met the flood victims whose houses were swept away by floodwater.

The DC directed the department concerned to submit a report on the damages and the proposed measures for early restoration.

Besides the DDMO, the DC was accompanied by officers of the hydropower and public works departments. (DIPRO)