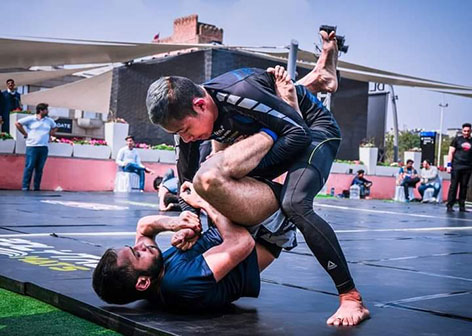 MIAO, 1 Sep: Jowkhum Dilli from Bordumsa in Changlang district has scripted history by becoming the first Arunachalee to win a bronze medal at the Global Association of Mixed Martial Arts (GAMMA) Asian Championship in Kyrgyzstan on 27 August.

The 25-year-old Dilli fought in the 52.2 kg weight category. He put up a tough resistance against his opponent and managed to clinch the bronze medal.

Team India had a great outing in the event having won a string of medals, including four gold medals and finished third in the standings behind leaders Kazakhstan and Kyrgyzstan.

As news of Dilli clinching the medal in the championship flashed, messages congratulating him started pouring on social sites.

Singpho Development Society secretary-general Ongyun Maio termed the victory as an eye opener and a beautiful gift to Arunachal Pradesh.

He said that Dilli will be accorded warm welcome at Bordumsa on 4 September.

Miao Singpho Ramma Hpung president Gamseng Singpho and general secretary Pisi Zausan urged the state government to reward Dilli with a government job and other financial incentives for winning the medal in the Asian level and bringing fame to the state and the nation.

Son of Mailu Moko of Bordumsa, the young fighter had quit his higher education and joined martial arts at Bidang MMA in Guwahati from 2016 to 2018.

He also underwent six months’ course in Combat Clan in Kolkata and continued learning the art at Abrasumente Academy in Itanagar for another six months.

Dilli also joined Crosstrain Fight Club in New Delhi, one of the top academies that have so far produced many national and international champions.

He was selected for the GAMMA Asian Championship during a state level contest, which was held in Bangalore in March this year.

Dilli was running through tough times in meeting his daily required food supplements, nutrition, coaching fees and flight tickets for the championship, which involved huge amounts of funds.

As Dilli faced financial problem to participate in the championships, Changlang Deputy Commissioner Dr Devansh Yadav through social media appealed to all to extend financial support to the young fighter.

Responding to the DC’s appeal, people from all over started donating online, which resulted in the collection of nearly Rs 1.5 lakh.

GAMMA is the global governing body for mixed martial arts, encompassing men, women, and youth participation and competition. Its mission is to develop, promote, and lead MMA to global recognition as the pinnacle of combat sports.