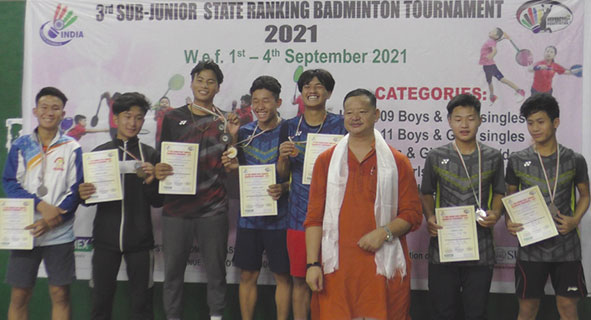 “The state has no dearth of talent in sports but lacks in proper trainer to polish the talent,” Phassang said in his address at the closing ceremony of the 3rd Sub-Junior State Ranking Badminton Tournament here on Saturday.

He said he would personally approach union minister Kiren Rijiju and CM Pema Khandu to take up the matter of providing a foreign badminton coach with the Centre. “If needed, I will meet the union sports minister along with an ASBA team,” he said.

Phassang urged the players to continue their passion for badminton. He asked the youths to adopt at least one sport to keep their body fit, and to not indulge in any kind of antisocial activities.

The mayor also handed over the medals and certificates to all the winners.

In the U-18 girls’ category, Taku Neha won the first position and Napi Tayam was adjudged second.

In the boys’ U-18 category, Nikil Chetry secured the first position and Robin Laa secured the second position.

Medals and certificates were also distributed to the winners of various other categories, including mixed doubles, boys’ doubles and girls’ doubles.

Among others, Ward No 6 Corporator Gyamar Taz and MLA Gokar Basar attended the event.