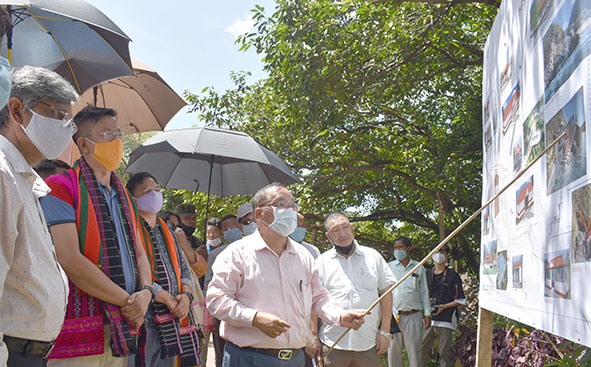 TEZU, 4 Sep: The tender process for development and renovation of Parshuram Kund in Lohit district is underway and the contractor has been directed to start the work, informed Tourism Minister Nakap Nalo.

Speaking to the press, Nalo said that “Arunachal Pradesh has vast potential for cultural tourism, adventure tourism, ecotourism and wellness tourism, besides other ways to promote the state, such as sports, natural resources exploration and exposure to traditional and cultural heritage of the state. The tourism sector has vast scope for economic development and employment opportunities and sustainable development through several opportunities, like construction of homestays, construction of infrastructure for wayside amenities, proper functioning of tourist routes in all 12 tourist circuits of the state, which have been approved by the ministry of home affairs.”

“The government of India has approved the central sector scheme PRASAD for development of Parshuram Kund, amounting to Rs 37 crores. The work has been divided into four components and the tenders have been awarded for three components. The state PWD (SID&P) is the implementing agency and the plan and design and master plan have been made known to us by the chief engineer at the site today,” the minister informed, adding that “the work will start in October, under PRASAD Scheme-I.”

Nalo also informed that he has inspected the site for development of Parshuram Kund and other amenities for foreign, national and local tourists visiting the pilgrimage site.

“I have also interacted with the locals of the area and directed the deputy commissioner to liaise with the Pilgrim Seva Trust and the locals to garner support from all stakeholders for smooth completion of the project,” Nalo said.

Tourism advisor Laisam Simai informed that nodal officers for the project have been deputed and they will look after it. “We will see to it that several tourism projects of the state are renovated and put into use for the development of the tourism industry,” he said.

PWD (SID&P) CE Atop Lego informed that several amenities are being developed in the area, “including parking, waiting hall and restroom with a capacity of 1,000 people, public convenience, cyber café, huts, and souvenir shops to promote local items.”