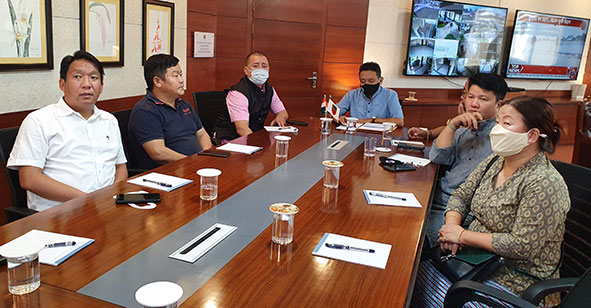 ITANAGAR, 4 Sep: Legislative Assembly Speaker PD Sona on Saturday chaired a meeting with the MLAs of the districts located along the Sino-India border in Arunachal to discuss issues pertaining to the developmental needs of the people living in the border areas.

The speaker, who represents Mechuka assembly constituency bordering China, said that the meeting was necessitated to discuss and find ways to check the migration of people from the border villages to urban areas.

“The people living along the international borders are still devoid of basic amenities, owing to which they migrate to urban areas in search of better life,” the speaker said, and suggested that the border areas need to be developed on priority in order to check people’s exodus.

Accordingly, the members formed the ‘Indo-China Border Development Legislators’ Forum of Arunachal Pradesh’ with Sona as its chairman, Tassar as its convenor, and the others as members.

The MLAs also suggested modifying the existing BADP guidelines, fund enhancement and submission of block-wise utilization certification instead of the existing collective one, which they said “unnecessarily hampers the implementation of BADP schemes.”

The forum is expected to submit a memorandum to the chief minister shortly, highlighting their grievances. (Speaker’s PR Cell)