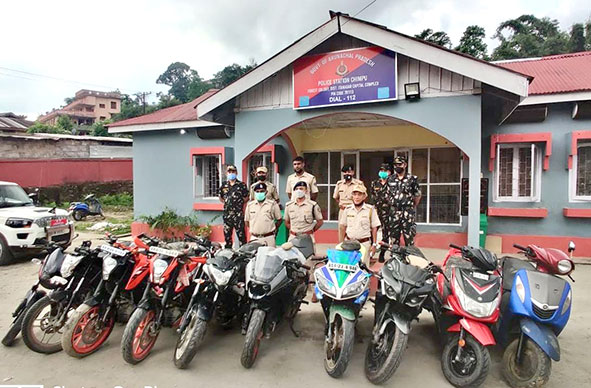 ITANAGAR, 4 Sep: The capital police on Saturday busted a gang of two-wheelers thieves by apprehending seven people, including four juveniles, and recovered 11 two-wheelers from different locations in Seijosa in Pakke-Kessang district and Biswanath Charali area in Assam.

Addressing a press briefing at the Chimpu police station, ICR SP Jimmy Chiram informed that three of the arrested persons have been identified as Gopal Giri and Navojyoti Nazari from Balijuri and Deepak Sargairi, who works as a mechanic in Tinsuti, Assam.

The four juvenile accused have been sent to the juvenile home, the SP informed.

He informed that “the people whose bikes were stolen and their local source gave input on one suspect, through which the whole gang was busted.”

“Among the recovered bikes are three KTM models, two Bajaj Pulsar (180 and Rs 200), R15, an Aprilia scooter, a Yahama RZ and a Yahama Fascino,” the SP added.

He informed that the modus operandi of the gang was to commit the thefts at night and, after stealing the bikes, go straight to Seijosa area, bypassing the Hollongi check gate, and sell the expensive bikes at the rates of Rs 2,000 to Rs 3,000.

The SP further informed that, considering the rising two-wheeler theft cases in Itanagar, the capital police have intensified night patrolling in Itanagar and Naharlagun, under the supervision of the Itanagar SPDO.

“The capital police are committed to provide safety and security to the citizens. We need cooperation from the public,” said the SP, and advised the public to be cautious while parking their bikes and cars.