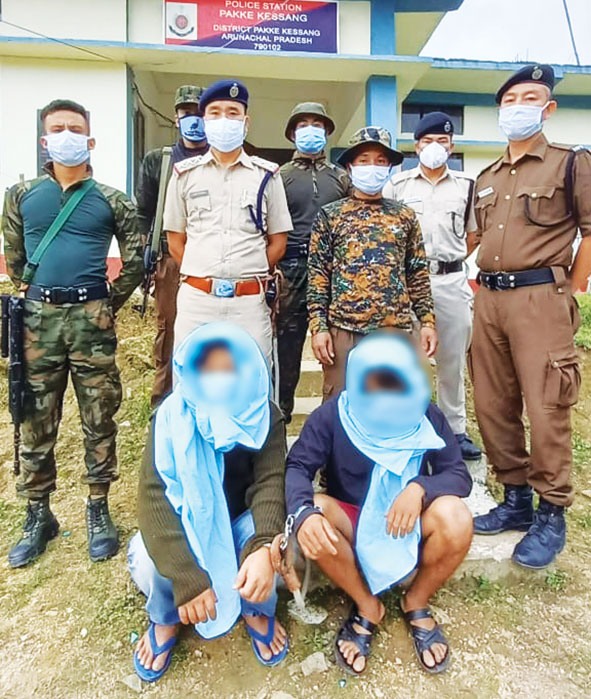 PAKKE-KESSANG, 5 Sep: The Pakke-Kessang police have cracked the case of the recent series of cattle thefts by arresting two prime accused, identified as Yarda Kamgia Kiogi (24), of Kra Daadi district, and Riba alias Gambu Brah (26), of Seppa in East Kameng district, on 2 September.

They were arrested from Doimukh and Lekhi village, respectively, in connection with Case No 4/21 u/s 429/379/34 IPC registered at the Pakke-Kessang police station, informed SP Habung Hailyang.

“Both the accused are in police remand for further investigation. One .22 rifle, an Alto car bearing registration number AR-01E-5562, and a Mahindra Xylo car have been seized in connection with the case,” the SP said.

He informed that on 10 July, a written FIR was received at the police station here from one Atung Tok, of Palove village, reporting that his female mithun had been killed on National Highway 13, near Palove-Suchung village, by some unknown miscreants who took away the animal’s meaty parts, leaving behind the head, legs and intestines on the spot.

A case was registered at the police station and investigation was launched.

Subsequently, an FIR regarding another mithun theft was received on 30 July from one Hari Nabam, of Pakke-Kessang, who stated that his mithun had been killed on NH 13 on 28 July by some unknown miscreants who took away only the meaty parts of the mithun and left the carcass behind. Another case was registered at the police station.

The SP informed that in both cases the mithuns died of gunshot wound to the head.

Pakke-Kessang PS OC Inspector Padi Payang and his team, under the guidance of the SP, launched an investigation.

“The modus operandi of the accused was, mithuns were killed in the wee hours on the roadside with a .22 rifle and the meaty parts were chopped into pieces and taken away in cement or gunny bags,” the SP said.

“They would carry the meat in a small private car and cross the check gate on the pretext of medical emergency. The mithun meat were sold in Lekhi, Nirjuli and Seppa town at wholesale rates much lower than the prevailing market prices to the mithun meat vendors of the markets,” the SP said.

Hailyang appealed to the public to cooperate with the law enforcing authority by reporting such cases at the earliest at the nearest police station.

“The mithun meat vendors should share the inputs of illegal meat dealers as and when they approach them to sell the mithun meat at a cheaper rate. Only by collective efforts of all the members of the society we can save the sacred animal, mithun, which has great cultural significance in the tribal society,” Hailyang said.

The mithun (Bos frontalis) is regarded as a sacred semi-domesticated animal in the socioeconomic life of the tribes of Arunachal.