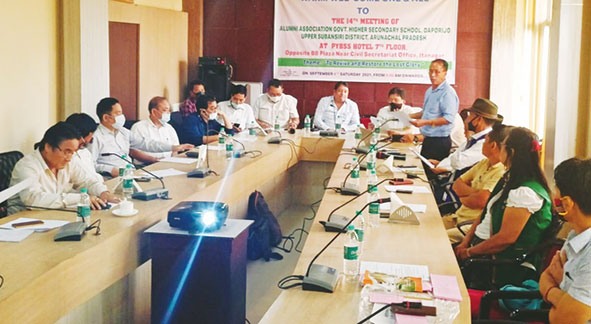 ITANAGAR, 5 Sep: Expressing serious concern over rampant encroachment on the land of the GHSS in Upper Subansiri HQ Daporijo, the school’s alumni association has demanded that the district administration demolish all the illegally constructed buildings on the school’s land and free the teachers’ quarters which are illegally occupied by private individuals.

On Saturday, the alumni of the school held a meeting to discuss various issues and problems faced by their alma mater.

During the meeting, the alumni, including Daporijo MLA Taniya Soki, Dumporijo MLA Rode Bui, former minister Daklo Nidak and former MLAs Larbin Nasi and Dikto Yekar slammed the encroachment on the school’s land and urged the district administration to take immediate action to free the school land and the teachers’ quarters from illegal occupation.

A representation in this regard will be submitted to the deputy commissioner soon, the association said in a release.

The association urged the school’s principal to issue notices to the teachers who are still occupying quarters even after their transfer from the school many years ago. In case of non-compliance, the association suggested to the principal to seek the district administration’s help to force them to vacate the quarters.

The alumni also discussed the issues of overcrowding of students in their alma mater and its reasons, non-functional schools in far-flung areas like Nacho, Kodak, Taliha, etc, ways and means to make the schools functional, teachers’ shortage in various schools in the district, etc.

They requested the DDSE to prepare a list of teachers posted at defunct schools and to post such teachers to other schools, including the Daporijo GHSS.

The alumni association further decided to move the DDSE and the DC to take up with the education department’s higher authorities the matter of upgrading the Sippi and the Lida secondary schools to the higher secondary level.

Earlier, Soki urged his colleagues Nakap Nalo and Taliha MLA Nyato Dukam to streamline the schools in their constituencies.

“The schools in the upper belt are not functioning properly and that is why the overcrowding in the Daporijo GHSS,” he opined.

Soki said he would take up with the competent authority the matter of posting of PGTs to the GHSS.

Bui proposed that all the MLAs of the district contribute at least Rs 20 lakhs each from their local area development funds, or from any other sources, for the cause of the GHSS.

TRIHMS’ senior surgeon Dr Rejum Ronya said that every alumnus should give back something worthy to their alma mater, while RWD Additional Secretary Repo Ronya proposed upgrading the Sippi and Lida secondary schools to higher secondary level to minimize overcrowding at the Daporijo GHSS.

The meeting was presided over by alumni association chairman Dosh Dasi.