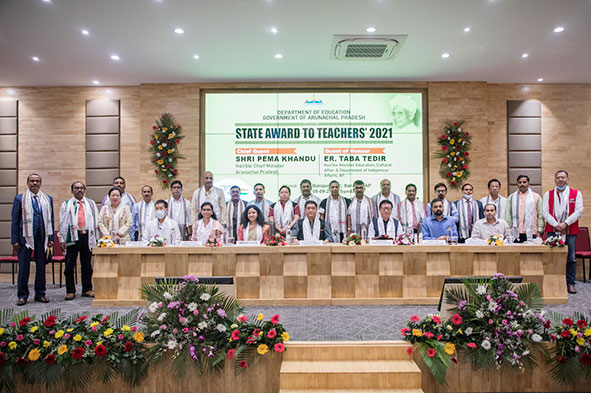 ITANAGAR, 5 Sep: Forty teachers from across the state were conferred the ‘State Teachers Award-2021′ for their service to the state this year on the occasion of Teachers’ Day, which was celebrated at the banquet hall here on Sunday.

Addressing the event, Chief Minister Pema Khandu said that, under the New Education Policy (NEP), the state government will focus on four thrust areas “to shape future scope and dynamics of the state’s education scenario.” These four thrust areas are foundational literacy and numeracy; early childhood care and education; e-governance and digital education, and vocational and teachers’ education, he said.

Terming the NEP “one of the biggest reforms ever in the education sector,” Khandu said that the state government is “all set to achieve the vision of 10 years as proposed in the policy, for which two state task forces have been constituted and several rounds of consultations have already been held by them.”

The CM informed that the government recently launched ‘Mission Shiksha’ with the aim of providing good quality education to the students in an improved educational environment, and uplifting the morale of the teachers. “We have also declared 2021 as the ‘Year of Education’ and will invest sufficiently through convergence to overhaul our education system,” Khandu informed.

However, the CM lamented that the quality of education, instead of growing, has degraded in these years.

“We as a state have certainly faltered somewhere. We grew from three primary schools to 4,000 schools. The number of teachers also increased manifold, but we are still struggling to improve our quality of education. So many drawbacks and complaints still continue to haunt the system,” he said.

The CM blamed the lack of a robust transfer and posting policy for the poor quality of education in most of the government-run schools.

“On records, we have sufficient number of teachers, but still so many schools across the state report shortage of teachers. This has to be resolved,” Khandu said, and added that “the state’s education department is working on it and soon transfer and posting will be digitally and transparently rationalized, which will be available on the department’s web portal.”

He also said that political interference or influence in transfer and posting, particularly in the health and education sectors, will not be allowed.

Khandu said that “certain reforms do hurt certain sections of people at the beginning, but in the long run results will be sweet,” and cited the example of the establishment of the state Staff Selection Board.

Reforms in the education sector may also hurt a few, Khandu said, and appealed to the teachers to “face it for the larger interest of the students, who are the future of the state.”

As schools are reopening after a long time due to the pandemic, he said the teachers have more work to do with their students.

“You have the added burden to rekindle the interest to learn in students, who might have got distracted due to the pandemic. The future of our students depends upon you, more so in the post-pandemic period,” Khandu said.

Raising the issue of drug abuse, the CM called upon the teachers to join the fight against the menace.

He said the government is determined to eradicate the social evil, and sought cooperation from the teachers in spreading awareness and educating students on the ill-effects of drug abuse.

Third-language textbooks for eight tribes of Arunachal, published by the SCERT, were released on the occasion. These will be introduced in the upper primary level from the next academic session.

In Chongkham in Namsai district, Deputy Chief Minister Chowna Mein said, “Imparting knowledge is the noblest of professions and the most precious” at the Teachers’ Day function organized there on Sunday.

Extending greetings and best wishes to the teaching community, Mein said that “learning is a never-ending process,” and urged parents to shoulder the responsibility along with the teachers in educating their children.

Earlier, the DCM paid floral tribute to the portrait of former president of India Dr Sarvepalli Radhakrishnan and described Radhakrishnan as “an educator, scholar and philosopher who believed that education could dispel ignorance and illuminate individuals.”

The retired teachers were honoured with shawls, mementoes and bouquets, and one teacher each from five blocks of the district was recognized as the ‘best teacher of the block’. They, too, were given certificates and mementoes.

DDSE Tage Kakki informed that, after taking charge as the DDSE, he visited all the schools of the district. During his visits, he said, he “found that some teachers of the district are discharging outstanding dedication in their duty, which needs to be recognized, so the idea of Teachers’ Day celebration in the district was conceived.”

He urged the teachers of the district to work with enthusiasm for the betterment of the society.

In East Siang HQ Pasighat, three teachers were awarded for their commitment to provide quality teaching, and for their honesty and sincerity, in a function organized by the Kiiling Kanggeng Society (KKS).

Earlier, dignitaries paid floral tributes to the portrait of Dr Radhakrishnan, spoke on the role of teachers as nation builders, and threw light on various changes in the education system in India. (With inputs from CM’s PR Cell, DCM’s PR Cell and DIPRO)