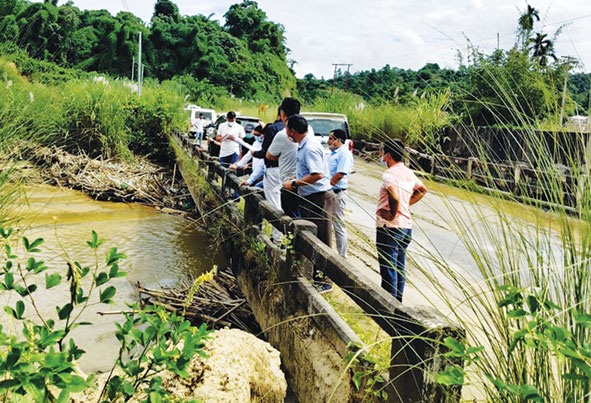 ITANAGAR, 7 Sep: A high-level team of officials from the union ministry of road, transport & highways (MoRTH), the state PWD highway department and third-party monitoring consultant THDC India Ltd inspected the Itanagar-Hollongi road on Tuesday to assess the damages caused to this stretch of the four-lane highway.

The team also includes officials of SPS Consultancy, which prepared the DPRs for the Bank Tinali underpass and the damaged portion of the Itanagar- Hollongi road for the state PWD highway department.

Starting from Hollongi, the team minutely inspected all the damaged portions. The THDC has been appointed by the MoRTH to verify the DPR and suggest better ways to strengthen NH 415 in between Chandranagar and Hollongi.

Briefing the media, THDC DGM (design) Neeraj Aggarwal said that the joint inspection is being done with the aim of strengthening the Chandranagar-Hollongi road.

“We have brought in a slope stability expert as part of the team. Detailed investigation is being done at the micro level. Everything, including geology and design, is being looked into,” informed the DGM.

He said that a new DPR for reconstruction of the Itanagar-Hollongi road will be prepared within a month.

“We will submit the DPR to the MoRTH within a month. Hopefully, in the next six months, the Itanagar to Hollongi road will see improvement,” he said.

The team also visited the Papu-Yupia-Hoj-Potin stretch, which has suffered major damages. “The entire stretch of the Doimukh-Hoj-Potin road will be repaired. We have visited the major damaged portions. For the Kalamati area, we are exploring different options,” said Aggarwal.

The team will also visit East Siang district, where major damages have been caused to the Pasighat-Pangin TAH by the monsoon rains.

“In 2019, heavy damages took place on the Hollongi-Itanagar four-lane road. Some of the stretches were almost on the verge of complete cut-off. The stretch was inspected by MoS for MoRTH VK Singh in August 2019 along with the chief engineer and the RO of the MoRTH,” informed the EE.

He said that, based on their directions, immediate maintenance and restoration work started on a few stretches in 2019 and simultaneously a “special repair DPR” was prepared through a consultant and submitted to the ministry.

“Every procedure was completed up to the stage of being sanctioned in February 2020, but due to the Covid lockdown the DPR could not be sanctioned. Later, the DPR again went up to the ministry in March 2021, but sanctions could not be obtained this time too,” added Tath.

Recently, the issues of the Hollongi-Itanagar road, the Papu-Yupia-Hoj-Potin road and the Pasighat-Pangin road were raised by union Law Minister Kiren Rijiju with top officials of the MoRTH.

“The intervention of the union law minister and Chief Minister Pema Khandu came at the right time. The MoRTH secretary directed the MoRTH chief engineer to get a third-party vetting of DPR through THDC. Today’s visit is the outcome,” said Tath.

Further, he informed that the ministry has sanctioned Rs 22 crores for carpeting the Itanagar-Hollongi road. However, he said that re-carpeting will be done only after the strengthening of this stretch of NH 415 is completed. The EE also said that two wayside amenities have been proposed, one in Hollongi, near the approach to the airport, and another in Nirjuli.

He sought cooperation from the people of the capital region in the construction of Packages B and C.

Meanwhile, Abishek Kumar of SPS Consultancy sought to allay concerns over the safety of the newly constructed underpass in Bank Tinali and said that the underpass is stable and has been constructed as per the design and there is nothing to fear.

“The leakage that is happening at the underpass has been done purposefully. This has been done to drain out stagnant rainwater. This process is required in this kind of project and is a standard technique. The underpass is absolutely safe and people should not fear,” said Kumar.