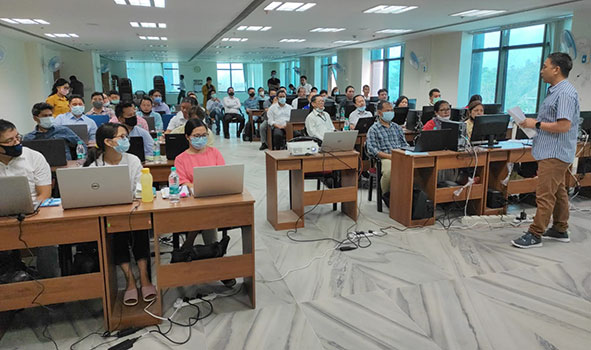 ITANAGAR, 8 Sep: Dozens of government departments are reportedly failing to get on board or comply with the government directives to implement e-Office in file movements.

Chief Secretary Naresh Kumar had issued an order on 13 August 2021, directing the principal secretaries, commissioners, secretaries and heads of departments to ensure mandatory and consistent use of e-Office in their respective departments and offices by 31 August.

The chief secretary said that as per the government decision, e-Office shall be the “only mode of file movement, within and across the departments.”

“Any movement of physical files even alongside use of e-Office shall not be entertained and all the dak/receipts received in any office at any of the point of contact in physical form also needs to be scanned and digitised and diarised by the respective office staff in the e-Office for further processing,” the chief secretary added.

The CS reiterated that the government has emphasized on timely disposal of files and officers responsible for keeping the files pending for more than the stipulated time limit would be hold accountable.

Reportedly, as many as 170 offices of the state civil secretariat, including directorates and equivalent offices of the Capital Complex are boarded in e-Office.

So far, it was reported that 90 percent of the departments in the civil secretariat and the directorate offices have boarded on e-Office. However, there are some departments who are yet to implement e-Office, such as Chief Engineer PHE&WS (Design and Planning), Arunachal Pradesh State Legal Services Authority, Central Electrical Zone (Department of Power), Directorate of Information and Public Relations, Hydro Power Development Coordination, WRD Eastern Zone and Western Zone, Resident Commissioner, PWD Vigilance & Training, and PHE& WS (Western Zone).

The mentioned departments are reportedly still relying on physical file movement despite various rounds of trainings and refresher trainings for section officials and nodal officer-cum-master trainers.

The e-Office project is one of the major reformative steps taken by Chief Minister Pema Khandu’s government under the Department of Information Technology & Communication (DITC) in order to improve efficiency, transparency, accountability, red-tapeism in government processes and service delivery mechanisms.

Khandu had officially launched the e-Office on 16 August, 2016.

“From the DITC’s side, we have done our technical part, such as imparting trainings and sensitization and onboard all the offices of the AP Civil Secretariat along with directorates and equivalent offices of the Capital Complex by updating and integrating the Employees Master Data (EMD) and File Heads of all the departments and directorates in e-Office database. Now all we need is administrative support from some departments that are yet to implement it,” said Duchi.

He also informed that there is reluctance among some sections of non-technical expert officers, such as concerns on potential compromising of official secrecy; risking confidential files, and chances of tampering and distorting important files, etc.

“The DITC assured transparency-accountability and encryption of confidentiality, which are major features of the e-Office. The file is encrypted unless the concerned authority consents to it,” Goter said, adding that “there is zero risk of peeping toms and sneakers into other’s office file contents.”

He also informed that to maintain security a Web VPN (virtual private network) account is provided to the officers and officials for accessing e-Office from any open or unsecured internet network.

However, it is informed that a section of employees are reluctant to shift to a new working environment as many working group officials have low computer literacy. The lack of internet facilities and outdated computers equipment is also hampering its implementation.

“Based on multiple requests coming in from various offices for an additional e-Office training, the DIT&C has decided and kept every Friday of September 2021 as open training session to support smooth transition from physical file to electronic file mode of office business operations,” Goter said, adding that the department is planning to roll out e-Office in the district headquarters by 31 March, 2022.