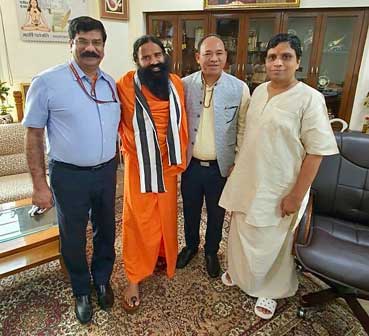 HARIDWAR, 9 Sep: Arunachal’s Environment & Forest Minister Mama Natung on Thursday visited the Patanjali Yogpeeth and Research Institute here in Uttarakhand, and called on Swami Ramdev and Acharya Balakrishna to discuss the prospects of setting up a state-of-the-art biodiversity park in Arunachal and carrying out scientific research and documentation of the state’s biodiversity.

The minister also emphasized on promotion and use of traditional systems of medicine such as Ayurveda and Siddha in India, particularly in Arunachal, and invited the Patanjali research institute to “create such facilities in Arunachal Pradesh.”

Natung also requested Ramdev and Balakrishna to set up an “Ayurveda-based drug de-addiction centre in the state.” The duo assured the minister of assistance in this regard.