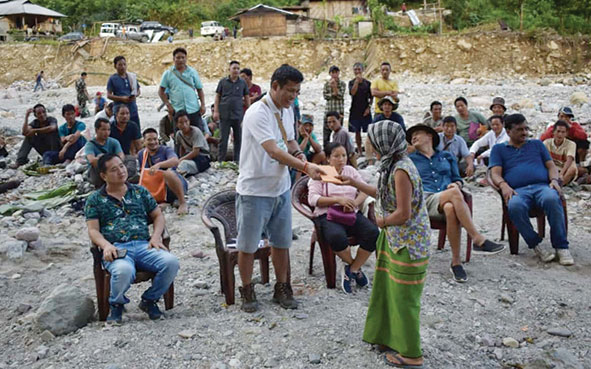 BOLENG, 10 Sep: Pangin-Boleng MLA Ojing Tasing on Thursday undertook a whirlwind tour of all the villages in Siang district affected by the flooding of the Hubbung and Simang rivers.

The flood that occurred on 26 August inundated roads, washed away a Bailey bridge, extensively destroyed agriculture and horticulture fields, and swept away three houses. The Hubbung small hydel project suffered the most damages.

Meanwhile, on Friday, 95 PRI members participated in a training programme on

Tasing, who inaugurated the programme, said that most of the PRI members are not acquainted with their powers and functions, and urged them to take full advantage of the training.

The MLA was accompanied by the DC, the SP and other officers. (DIPRO)