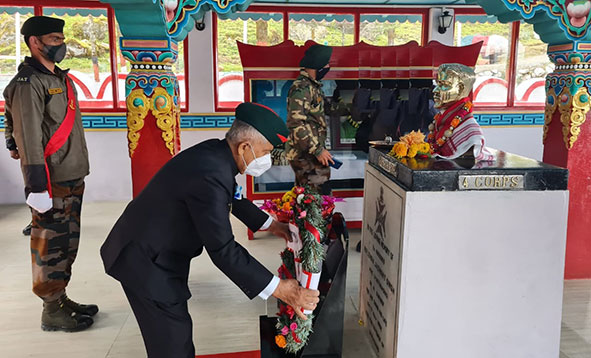 TAWANG, 26 Sep: Governor BD Mishra on Sunday laid a wreath at the Jaswant Garh war memorial near here and paid tribute to the 1962 war hero, Rifleman Jaswant Singh Rawat. He also paid his respects to the other war heroes of the Sino-Indian war.

“Tribute to these gallant men, who gave their today for our tomorrow,” Mishra said after laying the wreath at the war memorial as part of the Azadi Ka Amrit Mahotsav.

Rifleman Jaswant Singh Rawat was awarded the Maha Vir Chakra posthumously for his gallantry during the 1962 war.

The governor said that every year a large number of visitors, war researchers and foreign tourists regularly visit the site. He commended all the ranks of the 46 Mountain Brigade for the well-maintained war memorial.

Earlier, Mishra interacted with the troops of the 16 Madras Regiment at their unit in Nyukmadung near Dirang in West Kameng district.

He also unveiled the statue of Lt Col Ved Prakash Ghai, who made the supreme sacrifice in the Indo-Pak war of 1971. He was awarded the nation’s second highest gallantry award, the Maha Vir Chakra, posthumously for his outstanding bravery, indomitable spirit and sacrifice.

As a token of love for the troops, the governor presented copies of the book The Saga of a Braveheart: Lt Col Ajit V Bhandarkar, Shaurya Chakra, written by his veer nari. (Raj Bhavan)