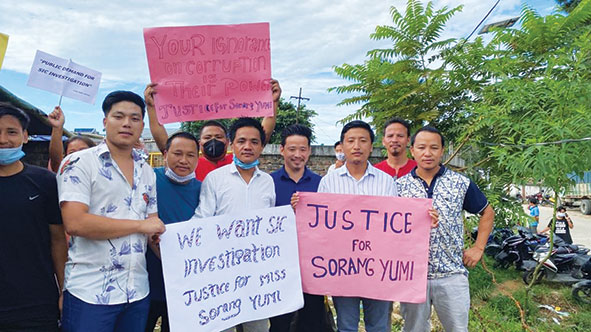 ITANAGAR, 26 Sep: The Anti-Corruption Foundation of Arunachal Pradesh (ACFAP) staged a protest rally here on Sunday, demanding justice for archer Sorang Yumi, who has accused the sports department and the Sports Authority of Arunachal (SAA) of corruption and nepotism in the recruitment process for archery coaches.

Members of various district units of the ACFAP, besides members of Wake Up Arunachal and the All Tagin Students’ Union joined the protest rally.

The ACFAP demanded that the state government direct the Special Investigation Cell (SIC) to investigate the case, besides demanding that the SAA director and the sports director be suspended immediately.

The sports department has admitted that there was a procedural lapse in the recruitment process for coaches and instructors.

On 14 September, the sports department issued an ‘offer letter’ to Yumi, which she outright rejected.

“The case should be registered at the SIC. The directors of the SAA and sports should be suspended immediately,” said Tahi Tarh, the chairman of the movement.

He went on to say: “Offering job is not a justification. The department is trying to cover up their wrong deeds. Even the offer letter was not issued through proper procedures.”

“If such deprivation continues, the sportspersons of the state would feel insecure. Justice would be done only by registering the case with the SIC and conducting fair investigation,” Tara added.

He further said that, if both the directors come out clean in the SIC investigation, the organization would be satisfied.

The organization has served 10 days’ ultimatum to the state government to register the case with the SIC and suspend the directors. Failure to fulfil the demands would invite a series of agitations, it added.