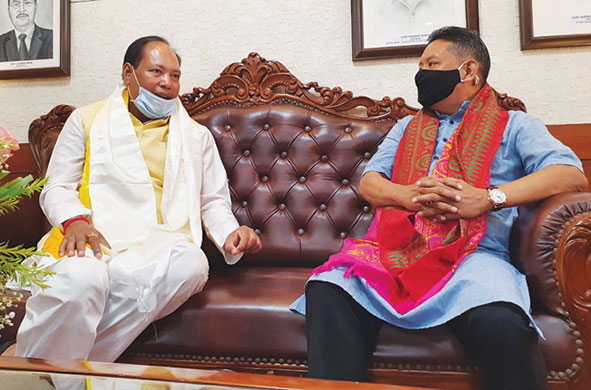 ITANAGAR, 27 Sep: Assam Legislative Assembly (LA) Speaker Biswajit Daimary on Monday paid an official visit to the Arunachal Pradesh LA here to get firsthand information about the national e-Vidhan project and sought Arunachal’s assistance and guidance in implementing the same in Assam.

The Arunachal Pradesh assembly is the first in the Northeast and third in the country to have successfully implemented the national e-Vidhan application (NeVA) project.

Daimary said that his state is also planning to bring in the digital project in the new Assam assembly building, which is likely to be completed soon.

“The whole idea of NeVA project is not only to make all functions of the assembly paperless but also to save time, money and energy,” Sona said, explaining the benefits of the e-Vidhan project.

A paper recycling unit is also being installed in the assembly complex to reuse waste papers, he said.

Officials of the state assembly explained to the Assam speaker the details of the functioning of e-Vidhan. Daimary, who was accompanied by Barhampur MLA Jitu Goswami and a team of officials, also practically experienced the e-Vidhan application. (Speaker’s PR Cell)