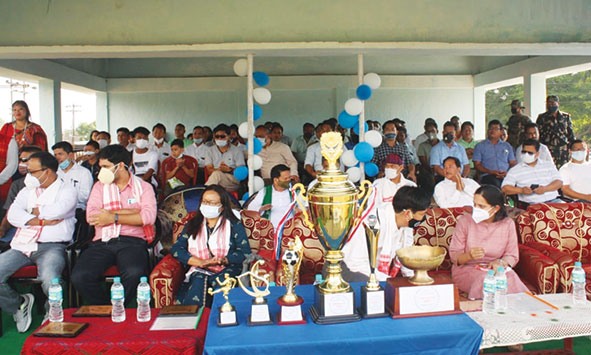 In the scintillating finale watched by jam-packed soccer lovers, UMFC defeated the opponent and lifted the trophy, while AYFC took home the runners-up trophy.

Twenty-seven teams from Changlang, Namsai, Papum Pare and Lohit districts faced off against each other in the knockout tournament.

Earlier, MLA Shomlung Mossang while commending the APCSU for the positive initiative highlighted the ongoing developmental projects in Diyun-Bordumsa constituency. He promised to allocate Rs 1 crore for a multipurpose sports ground in Diyun in the next financial year under the DoTCL.

Changlang DC Dr Devansh Yadav announced four Chakma villages – Milanpur, M’Pen-I, M’Pen-II and Dharmapur-II – as drug-free villages. He lauded the Chakma students’ union for “taking the initiative to engage youths in games and sports and develop the will to defeat drugs.”

“The APCSU has always been raising voice against drug trafficking and consumption and initiated many awareness programmes in the past by reaching out to villages,” said APCSU president Drishya Muni Chakma.

“Humanity demands certain discipline and that discipline cannot be achieved when our children and youths indulge in drugs. We wish to make our area a drug-free zone,” he added.

APCSU general secretary Supon Chakma said that “the drug menace can go to any extent to harm societies, irrespective of communities.” He appealed for timely intervention “before the menace leads the vulnerable sections to the jaws of death.”